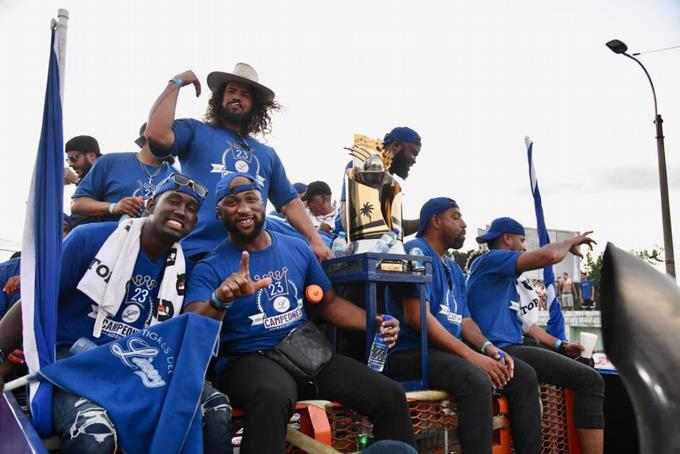 The first parade of champions by the Licey, in the last six years, was simply tremendous. A quiet Sunday, at least in the morning, one day after celebrating the commemorative festivities for the Virgen de la Altagracia, turned into a true “blue sea” in the afternoon, caused by the parade of today’s 23 monarchs, Tigres del Licey. Several thousand people, in motors, pasolas, cars, jeepetas and other types of vehicles protected the four sides of the two giant trucks that carried the heroes of the already famous crown 23 of the Tigers, a team that stopped their streak without pennants and once again took control of the scepters obtained in the history of the League. With chants and badges that “we won the 23 in the year 2023 and against the 23 series team” were one of the slogans of the large group of partial blues that to the rhythm of a mixture of music followed the route of about three kilometers on foot. all kinds of vehicles that moved with the slowness of an “ant” through different sectors of the capital. It was not necessary to wait for the caravan to advance so that the high school masses were large. At each of the stops, supporters were waiting for them with banners in their hands and with their bugles chanting the famous refrain “Licey Campeón, Licey Campeón”. Along with them, one of the emblematic songs of the team, the one that says, “What you want is for the Tiger to eat”, by Toño Rosario, who even together with Chiquito Team Band and Secreto had the responsibility of brightening up the atmosphere in the stop at which the caravan would end. That parade that left 1 hour and 10 minutes later than projected and that the abundance of people in the streets made it return about four hours later than estimated, since the original program projected that it would end at around 7:00 at night. Doña Teresa Amengual, a 75-year-old lady, still exhibiting her qualities, wanted to join the parade and even with a blue flag in her hands, of course accompanied by some relatives. “I’ve been a high school student all my life, since the time it was played in Normal and I don’t want to miss this opportunity to celebrate with my team,” she told LISTÍN DIARIO. While the vehicles of different modalities bordered the caravans, on the sidewalks young and old, women and men, everyone applauded, sang and cheered their heroes, who gave their hearts and souls to erase five years in which the trophy was not raised. That is why the screams did not stop when the trucks in which Emilio Bonifacio, César Valdez, Jorge-Aquamán-Alfaro, Michael de la Cruz, Luis Barrera, Yeison Asencio, Jorge Bonifacio, Raúl Valdés, Esmil Rogers, Michael De León, among other pillars of the blue monarchs. On the pedestrian bridges the crowd of people was notorious and in the Francisco del Rosario Sánchez a whole congregation of people paid tribute to what many consider the team of the Dominican people. And apparently it is so, because yesterday’s demonstration is the best thermometer of a high school fans who were eager to see their beloved Club Atlético Licey crown.