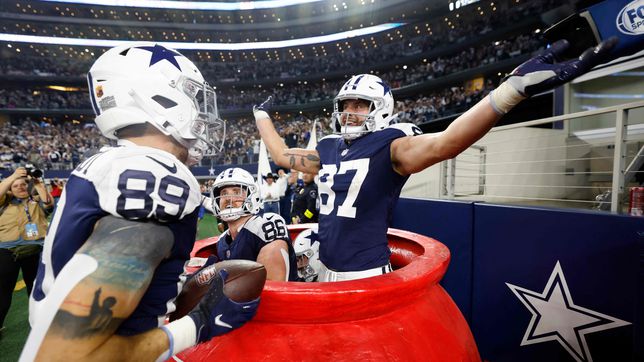 The Dallas cowboys (8-3) outscored the new york giants (7-4) in the second Thanksgiving Day game of the 2022 NFL season.

With this result, the team coached by Mike McCarthy remains fifth in the NFC and the tiebreaker criteria favors them over Brian Daboll, who took sixth position.

Here are the Keys to the Cowboys’ win over the Giants on NFL Thanksgiving Day.

Among Ezekiel Elliott and Tony Pollard had 152 of Dallas’ 169 rushing yards. In addition, ‘Zeke’ added a rushing touchdown. On defense, Dallas only allowed Saquon Barkley to generate 39 rushing yards. Coupled with efforts from Gary Brightwell, Daniel Jones and Matt Breida, New York had 90 yards on 21 attempts.

Dalton Schultz was Dak Prescott’s favorite target (21/30, 261 yards, 2 TDs and 2 INTs) in the end zone as two of his four receptions resulted in touchdowns.

Also, Peyton Hendershot he scored on a two-yard jet sweep and celebrated like Ezekiel Elliott did a few years ago. Likewise, jake fergusonthe third tight end on the depth chart, had 57 yards on three receptions.

Prescott only spread his pitches with CeeDee Lamb and Michael Gallup. Lamb caught six of the 11 passes Prescott threw his way for 106 yards; furthermore, he came within a heel of scoring on a one-handed reception during the fourth quarter. For his part, Gallup was part of the third down conversions and caught five throws for 63 yards.

Although the Giants collected their first offensive touchdown in a Thanksgiving game since 1938, the pressure overwhelmed Daniel Jones (21/35, 228 yards, TD) and the New York QB was sacked three times, two of them by Micah Parsons.

The second-year player reached 12 sacks on the season. With that, Parsos joined a select group that includes only Aldon Smith and Reggie White: 12 or more sacks in his first two years in the NFL.

The Cowboys were effective on third down, converting seven of 11 times. in which they were on that stage. On their first scoring drive, Elliott’s TD, they converted three times and Schultz’s first score came on third-and-goal from the 15-yard line.