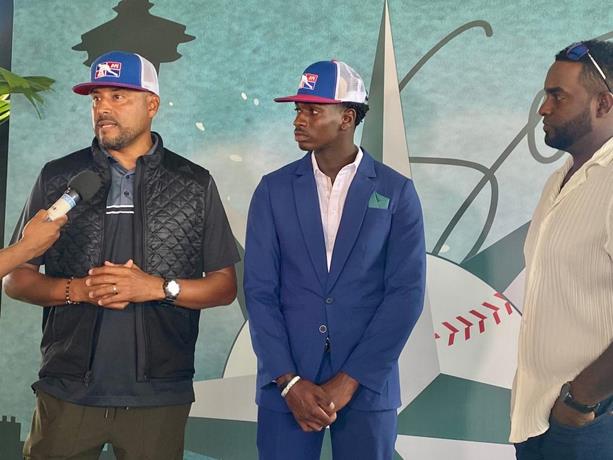 The Dominican Prospect League continues its great growth as an institution that provides the most refined young talent for baseball, a fact that is demonstrated in its more than 1,500 signed rookies since its birth 14 years ago.

The opening this January 15 was no exception and more than 35 players developed under the DPL systems paraded through the different baseball complexes, seeing their dreams of signing for professionalism come true.

Led by Felnin Celestén, the Dominican to receive the most lucrative bonus with 4.7 million dollars, the DPL registered multiple more than outstanding agreements such as those of Robert Calaz, 2.8 million with the Rockies; Raymond Mola, 2.5 with the Pirates; Camilo Díaz, 2.3 million with the Astros; Yoendry Vargas, 2.3 with the Dodgers; Germán Ramírez 1.2 with the Astros; Francisca Welbin and Joelin Céspedes $1.4 million each with Rangers and Red Sox; Emil Valencia, 1.3 with the Astros; Cristian Pérez 1.1 with Detroit among many others.

Brian Mejía and Ulises Cabrera, president and vice president of the entity show their great joy and pride because the entity they lead has contributed with the signatures registered by a large number of young people who have helped to materialize their purposes.

And a very transcendent aspect that they valued is that several dozen families after the pacts of their descendants can exhibit a better lifestyle than they had when they were developing in their respective leagues.

“We feel very pleased because what began as a dream 14 years ago, since then has been institutionalized and our system of attracting the boys and developing it has worked 100 percent,” said Mejía and Cabrera.

But, the first thing they express is that they have not worked alone, because together with them a large team of coaches and office executives work tirelessly, every calendar year, so that the DPL provides baseball in the United States with well-trained young people with Good academic and responsibility indexes.

That is why Mejía expresses that without the work of instructors such as JD Ozuna, Basilio Vizcaíno, Rafael Varela (Banana); Cristian Batista (Niche); Chiqui Mejía, Quico Peña among others, it would not have been possible to achieve the achievements that are recorded.

While Franklin Taveras Jr., Anaima Acta, and Roberto Carper have excelled for years in what is the executive part of DPL.

Since José Ramírez became the first DPL player to reach the Major Leagues in 2013, some 80 have followed in his footsteps, including Julio Rodríguez and O’Neil Cruz in the most recent crop. The group includes stars such as Fernando Tatis Jr; Juan Soto, Vladimir Guerrero Jr, Sandy Alcántara, Framber Valdez among others.

The DPL has taken these youngsters to travel to places like Miami, other locations in Florida, Chicago, Arizona among others.

As soon as each January 15 process is dismissed, the entity organizes baseball tournaments in all regions of the country and there is a large team of evaluators who is taking out the best possible talent and then raising their tools.