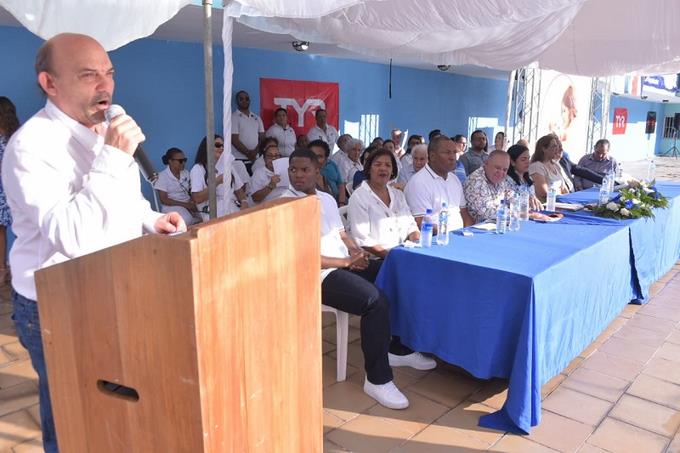 The XXXIX International Swimming Invitational of the Naco Dolphins was inaugurated with resounding success, with 11 countries and more than 550 athletes taking place at the Aquatic Complex of the Juan Pablo Duarte Olympic Center. The contest concludes tomorrow Sunday.

The president of Club Naco, the immortal Mario Alvarez Soto, congratulated the board of the Dolphins and all the swimmers who will raise the name of the club in this international competition.

“Count on our support, everything we do is for the benefit of our partners who are our reason for being,” he said.

The president of the Association of Parents of the Naco Dolphins also spoke, who affirmed that, once again, the athletes from Naco will go out through the front door, in a good fight.

Radhames Tavares said that he congratulated the Dolphins for this new international event.

Sida Medina delivered a plaque of recognition to Soriano Severino and family, who for more than 15 years were committed to the success and development of Los Delfines del Naco. She appreciated the distinction.

Claudia Pool, the first athlete in the history of Costa Rica to win the first and only gold medal for her country in the Olympic Games (Atlanta 1996), in the 200 m discipline, is present at the activity as the coach of Costa Rica. swimming freestyle.

In addition, he won two bronze medals at the 2000 Sydney Olympics in the same discipline. Her older sister Sylvia Poll won for Costa Rica the first Olympic medal in her history (silver) in Seoul 88.

Since last Thursday, some 550 athletes from the teams of Costa Rica, El Salvador, Guatemala, Aruba, Colombia, Mexico, Panama, Puerto Rico, Venezuela, the United States and the Dominican Republic, are competing in the children’s categories (9-10 and 11-12 years old), youth (13-14, 15-16, 17-18) and seniors in the 19 years and over category.

The Board of the Association of Parents of the Naco Dolphins, explained that this traditional aquatic event is considered one of the most important in the Central American and Caribbean area.