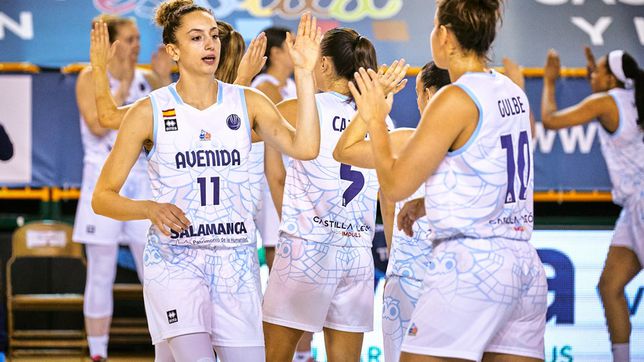 On Saturday, Perfumerías Avenida beat Lointek Gernika in LF Endesa without much trouble (73-54). At the subsequent press conference, Roberto Íñiguez surprised by announcing his departure (shortly after it was known that he had reached an agreement with the Turkish Cukurova) although he made it clear that his relationship with the club was excellent, that I did it to benefit him. “They are going dark brown with the Avenida, we are the target of hosts and i hope the people are united because It seems that we are the enemy and that nobody wants this team to go forward, that the team bothers that they win again ”, commented the coach in a farewell that, according to him, occurs at the opportune moment. “I leave a team released. I think it’s going up and that’s why I’m leaving. His substitute, Pepe Vázquez, will debut this afternoon in the Euroleague against the Italian Famila Schio Beretta (20:30). Vázquez, who until this week was the coach of Embutidos Pajariel Bembibre, knows Salamanca well: he was Miguel Ángel Ortega’s assistant in the 2018-19 season.

Íñiguez joined the team in the spring of 2020 and leaves the club with a balance of 116 wins in 138 games (84% wins) and with four titles: two Leagues, one Cup and one Super Cup. Also, in Europe it has managed to put Avenida in the last two Final Four of the Euroleague (the club had not achieved it for a decade), finishing runner-up in 2021 and third the following year. Although his third season with the team was not the same as the previous two, he considered in his farewell that this was the one in which he had been the “best coach”. Now, Avenida is third in LF Endesa (12-5) and fourth in the Euroleague (5-4), with a much more irregular game. The charro team had not added so many setbacks in the national competition since the 2014-15 season in which it closed the course with a record of 26-5, three of those defeats in the playoff final against Cadí La Seu in the semifinals and Girona, in the grand final.

Avenida, which won nine national titles between the 2016 League and the 2019 Cup, has been quite ‘humanized’ this season, partly because the merit of their rivals (Spar Girona and Valencia Basket), who have become great antagonists, but also due to injuries (Silvia Dominguez and Julia Reisingerova) and the lack of a great reference in the foreign game, as it happened in the previous seasons with Kahleah Copper or Jewell Loyd. Íñiguez abandons a ship that he hopes will harden its course without him. “This team is going to win the Cup, the League and it is going to play in the Final Four,” he says. Everything remains in the hands of Pepe Vázquez, with the Zaragoza Cup on the horizon.