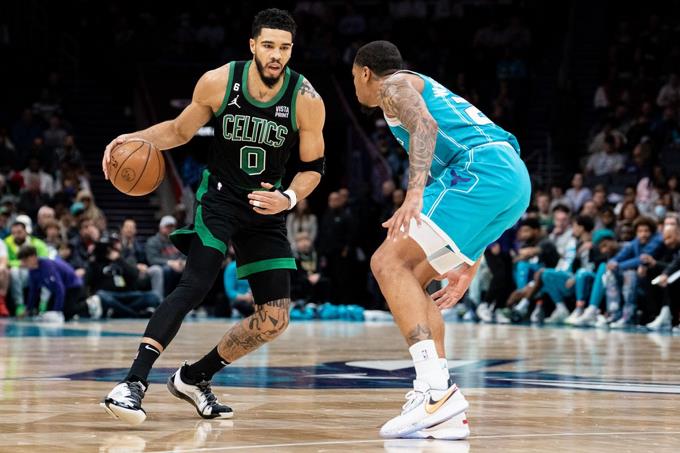 Jayson Tatum destroyed the Charlotte Hornets on Monday with 51 points and seven triples in the 130-118 victory of the Boston Celtics, in the special program of NBA games for Martin Luther King Day.

Tatum tied Gilbert Arenas for the third-best performance in NBA history on Luther King Day and was one point behind second-place Kemba Walker (52 in 2016) and ten of Damian Lillard’s 61 scored in 2020.

The Celtics leader broke the fifty-point barrier for the fifth time in his career and scored 18 in the fourth quarter, key to thwarting comeback attempts by the proud Hornets.

His game ended three consecutive triples for 51 points, with nine rebounds and five assists, on a day in which the Celtics could not count on Jaylen Brown, out due to injury.

They supported him Derrick White with 19 points and Malcolm Brogdon with 16 coming off the bench to give the Celtics, leaders of the Eastern Conference (33-12), the sixth consecutive victory.

With great pride, the Hornets had managed to cut a 17-point deficit to just two in the fourth quarter, before being crushed by Tatum’s 3-pointers.

It was the fifth straight loss for the Hornets and the eighth in the last nine games. The team coached by Steve Clifford occupies the last place in the East with a balance of 11-34.

And it is that the Celtics, despite not being able to count on Brown due to an adductor problem, do not stop stepping on the accelerator and celebrated their second victory in three days in the field of the Hornets.

Mazzulla’s team put the game downhill with a great start from Tatum, whose twenty points at halftime allowed the Celtics to escape until 49-32.

The visitors maintained a 16-point margin until the last 3:30 minutes of the third period, but a resounding 10-0 run by the Hornets restored hope to the Hornets.

LaMelo Ball shot up his percentages in the fourth quarter and his 3-pointers allowed the Hornets to close to within two points at 98-96.

TATUM, 18 POINTS IN THE FOURTH PERIOD

That’s when Tatum capped off his big day with a series of spectacular plays. He scored 18 points in the last segment, with four of five on three-pointers, and buried the comeback ambitions of the locals.

He sealed three consecutive triples in the final stretch that allowed him to break the fifty-point barrier and sentenced the Charlotte clash.

His terrific performance thwarted 25 points from LaMelo Ball and 26 from Jalen McDaniels, who shined with 5 of 7 from the arc.

THE NBA CELEBRATES THE LEGACY OF LUTHER KING

The game was played on the day the United States celebrates the legacy of activist Martin Luther King with a special nine-game program.

The franchises took to the track with some T-shirts with the phrase of Luther King: "It is time for justice to become a reality for all".

The NBA has celebrated Martin Luther King Day for 36 years, when this day officially became a national holiday.

It organized a special program of meetings each year with the sole exception of the 1998-1999 academic year, when the season began in an extraordinary way in February.

“We want players who respect Benfica”

Van Aert surrenders to Van der Poel: “He did an incredible sprint”