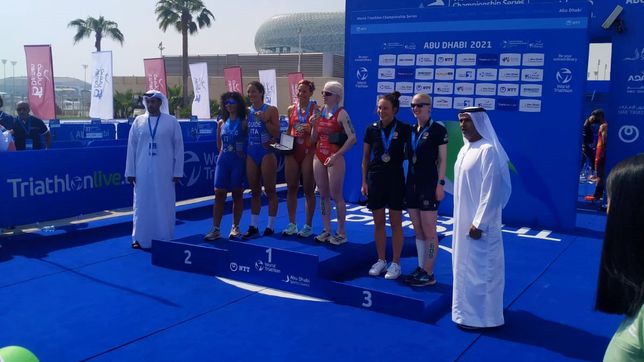 Abu Dhabi will become the world capital of Paralympic triathlon this Thursday. The Emirates will host the last major competition of the season, a World Cup where Spain will be represented by twelve athletes -six men and six women-, among which the Tokyo Paralympic medalists stand out: Susana Rodríguez, Héctor Catalá and Eva Moral. Although there are other names that they also smell like medals, like Lionel Morales, Dani Molina, Andrea Miguélez and Marta Francés.

The incombustible Susana Rodríguez and her guide Sara Loehr will be the great asset of our country and they will try to revalidate their world crown in the PTVI class for athletes with visual impairment. The Galician aspires to reign for the fifth time in her career and fourth in a row, a challenge up to the height of this athlete which already reached gold in Tokyo. The money then went to Héctor Catalá, who will face this new appointment with another guide, Carlos Oliver. The Valencian seeks to hang a metal again in the Abu Dhabi World Cup, where last year he already reaped a silver.

Another essential in this event will be Eva Moral, bronze in the last Games, where she already participated pregnant in the PTWC class for wheelchair and handbike triathletes. She now, she will resume it after giving birth and a physical problem prevented her from being in the Spanish championship. This will be her first major international competition after her maternity and she faces it with all her energy, since the athlete continued with her preparation during the months of pregnancy.

All of them are joined by other athletes to be very aware of, such as those of Andrea Miguélez, Marta Francés, Lionel Morales (number 1 in the world ranking), Daniel Molina, Rakel Mateo, Kini Carrasco and Jairo Ruiz. The latter —the first Spanish medalist in the history of the Paralympic Games— is back, after having lived through a difficult year as a result of a cervical injury.