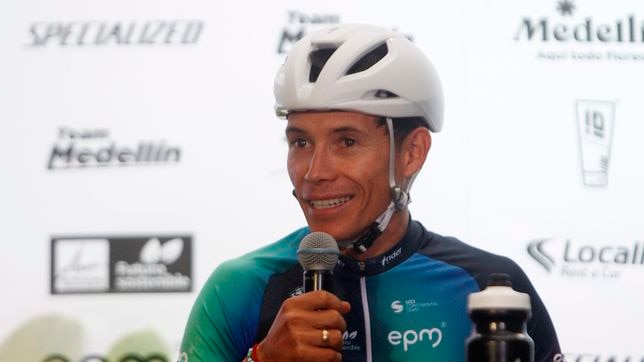 Team Medellín begins a new season and goes with luxury reinforcement. Miguel Ángel López will lead the squad whose first major objective is the Tour of San Juan in Argentina from January 22 to 29. Seven stages for the Boyacá cyclist to measure himself against some of the best in the world, including Colombians Egan Bernal, Sergio Higuita and Einer Rubio. The sprinter Fernando Gaviria will also take the game with Movistar.

At an event held in Medellín, Superman and his 10 companions officially presented themselves to the press and sponsors. It was the opportunity to reveal the new uniform that mostly has blue tones and one pink. The other great star of the squad is the Spanish Óscar Sevilla, who will surely be López’s right hand in the big races of the UCI Continental calendar.

“I am motivated, happy with this beautiful opportunity that the teacher, the Mayor’s Office, Team Medellín and all its sponsors give me. Super motivated and eager, I once again have that illusion of fighting and enjoying the greatness of the teammates I have. Running here in my country, sharing with people, having peace of mind and experiencing cycling more closely”, said Superman López at the launch.

The 28-year-old rider, who hopes that 2023 will be a transition to then return to a WorldTour team, He noted that he has not lost strength despite being downgraded. He wants to forget his controversial exit from Astana and focus on winning as many races as possible. He appreciates that this season he can be closer to his family and the Colombian people.

“The only thing I can say is that I am still motivated, eager. I have not been able to train very well at the end of the year in 2022, it has been difficult, but we have an excellent team, great teammates, very good people. We are going to do it very well, without pressure, to enjoy, to live every moment, which is the most important thing”, López commented.

What changes will the payment methods surprise us with?