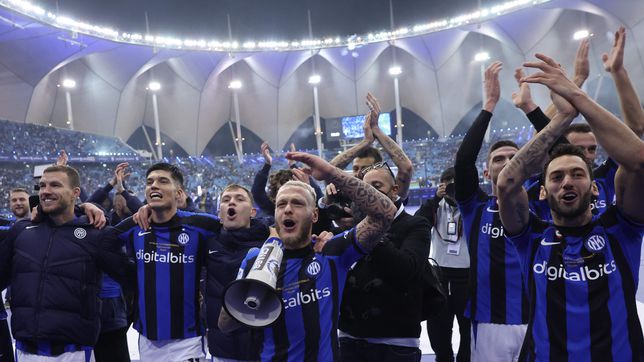 The Madonnina Super Cup was won by Inter. And how. The nerazzurri lifted the trophy for the seventh time by beating a struggling Milan 3-0, that adds this disappointment to the elimination of the Cup against Torino and the league draws with Roma and Lecce.

The final was played in Riyadh (twelfth edition away from Italy) and the difficulties of the rossoneriwho thus chained four games in a row without winning, they were noticed right away. There was intensity from the first minutes and Inzaghi’s men put the match downhill after just 10 minutes with a perfect play. Dzeko combined with Barella and the precise low cross of the Italian found Dimarco in the heart of the area, author of the 1-0 score at the first touch. Milan reacted with an initiative from Brahim and Leao, who came close to equalizing receiving a great ball from the Spaniard and trying a thread that was well neutralized by Onana, but at 21′ it was also 2-0.

Dzeko, after a pass from Bastoni, entered the box, got rid of a feint from Tonali and beat Tatarusanu with a cross shot. The same Bosnian and again Dimarco came close to making it 3-0 before the break, and Inter released the reins of the clash only in the first phase of the restart, Milan’s best moment. Theo, Leao and Bennacer were able to close the gap, but they lacked accuracy and at 79′ the sentence came. Lautaro signed itwho received a long pass from Skriniar, plowed past Tomori and pulled off a spectacular and precise shot with the outside of his right foot with his top hat. The derby basically ended there. Milan sought at least the goal of honor and came close only thanks to a cross from Rebic that went past Onana and hit the crossbar. after the win rossonero 2011, Inter then celebrated the second Milanese Super Cup in the history of Calcio and Simone Inzaghi confirmed himself as a specialist in the competition: he won the four finals he played matching the record of Capello and Lippi in his record. After having qualified for the round of 16 in the Champions League, leaving Barça out (and despite some ups and downs in Serie A), the nerazzurri They show once again that they are a great team.