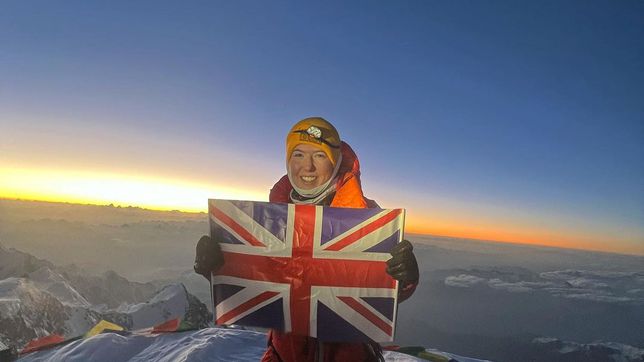 The strong wind, which has not dropped below one hundred kilometers per hour at the summit, has interrupted the challenge of the British mountaineer with dual Spanish nationality Adriana Brownlee and the Norwegian Kristin Harila to reach the top of Cho Oyu, and it has made them lose a large part of their material, valued at about 10,000 euros.

In a conversation with EFE from Kathmandu, Brownlee explained that the expedition of which the Nepalese guide Gelje Sherpa is a part and that tries to reach 8,201 meters of the sixth highest mountain on earth in the HimalayasHe wanted to do a rotation until camp 3 after Christmas to leave material and get closer to the summit, but his plans were frustrated.

“We knew that there were going to be very strong winds up to camp 1, but to the point that we couldn’t walk in a straight line because it pushed us back. And that is where the doubts began that our things deposited in the previous rotation were not going to be in field 1â ”, he indicated.

Brownlee recounted that in their attempt they reached 20 minutes from this camp 1, but they decided to stop and return to base camp, because it was very dangerous, although two Sherpas did manage to get there with great difficulty and confirmed that “all the tents and equipment were no longer there.”

“We lost everything. At least 10,000 euros of material. But instead of getting frustrated and angry we made a plan to go up again when there wasn’t so much wind and try to find some things. A few days later we went up and getting into the ‘crevasses’ and looking everywhere we found 3 downsuits (suits) and 2 sleeping bags, all 20 meters below ”, he lamented.

This situation forced them to spend the New Year at base camp, waiting for a window to be able to replace the lost material, but “Until now the wind has never dropped below 100 km/h at the top, making it impossible to do anything on the mountain.”

“In the end we decided to let the Sherpas go home, because some of them are instructors at the Khumbu academy and now there are courses they can work on, and Gelje Sherpa and I went to Kathmandu to wait for the wind to die down a bit.” , point.

From there, Brownlee narrates that they are still “waiting for a window in the first weeks of February”, although other problems may arise to resume an adventure. “The problem is that in that month it starts to snow and the ropes fixed up to 7,200 meters are going to break, come out of the fastening hooks or freeze,” he says.

Brownlee, the daughter of a mother from Alicante and an English father, says that she was hooked on the mountains from a young age following the example of her father and that at the age of 9 she set herself the challenge of achieving the record of the Three Peaks of Scotland, England with him. and Wales in less than a day.

Now he has ten of the fourteen eight-thousanders and last autumn he already tried to climb Cho Oyu with the intention of opening the new route from Nepal, although he had to postpone the project until now.

Jhanvi had to hide in the trunk of the car because of this, the actress said, she followed me on the bike.