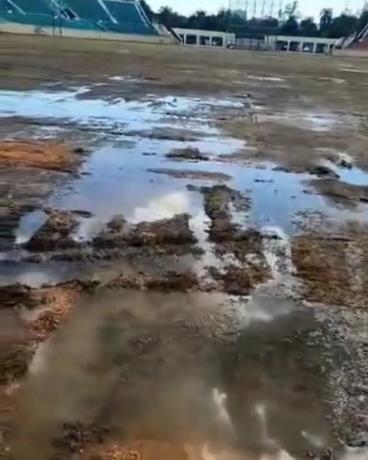 “Depressed”. This is how Jorge Allen Bauger, the director of the Dominican Soccer League, responded when his reaction was sought regarding the damage caused to the Félix Sánchez Olympic Stadium by “Monster Jam”, the show presented last Saturday by promoter Saymon Díaz. “We are impressed by the mistreatment that has been done to the field, I have never seen Félix Sánchez in that way, not even in his worst years,” Bauger declared. The enormous and unique machines, supported by rubber bands more than six feet high, caused serious damage to the lawn and the athletics track of the main sports facility in the country. “It is the temple of Dominican soccer. Everything that has happened is very sad”, he lamented with the hope that the company that put on the famous show with the huge and unique machines Grave Digger, Max D, El Toro Loco, Megalodon, Dragon, Monster Mutt Rottweiler, Zombie and Scooby- Doo, (SD Concert) fulfills its promise to repair any damage it would cause. “I understand that one can be calm because they are very serious companies because they have set up these events and I am sure that they will take responsibility”, expressed Bauger. Beyond the emotion, the adrenaline, that the famous American spectacle originated, the truth is that Saymon Díaz’s long-standing dream of bringing it to the country has become a nightmare for soccer and athletics, whose track, which was already in poor condition, has become practically useless. Listín Diario tried to contact producer Saymon Díaz, but the efforts were unsuccessful. During the period between 2018-2021, the “FIFA Foward” program and the Ministry of Sports invested 20 million pesos to recover the football field, the stage of the LDF. Benny Metz, the National Football Commissioner, through his twitter account, demanded that “the investment made in time and money, we demand be compensated under the same conditions or better than it was.” During 2022, several massive concerts have been held on this stage in which more than 40 thousand people attended, including: Daddy Yankee “La Última Vuelta World Tour”; Bad Bunny “World Hottest Tour”; El Alfa “The Legend of Dembow” and Coldplay, HER (US) and La Marimba.