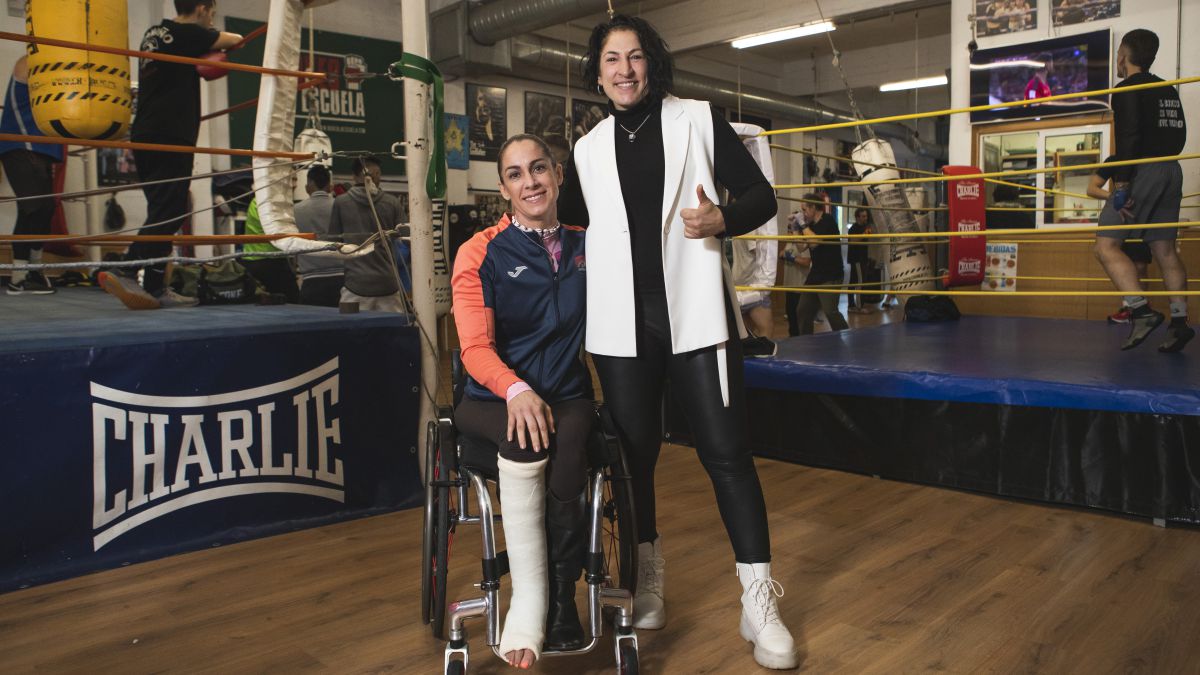 Only hope unites more than pain. The boxer Miriam Gutiérrez (Madrid, February 21, 1983) and the Paralympic athlete Carmen Giménez (Madrid, April 17, 1980) were victims of gender violence and this Friday, International Day for the Elimination of Violence against Women, they dust off their memories so that their example may be a light in the darkness of those who suffer. “You can go out. If we have managed to live, smile… They can do it too”corroborates Miriam before beginning her story.

“People told me: ‘You are a boxer, strong and a warrior’. Yeah, but I was getting smaller”

“It had started with a couple with whom tensions arose. They weren’t blows, but phrases: ‘Don’t go like that, change yourself!’, ‘Don’t do that’… No no no. That was on the rise and I didn’t realize it. Despite having character, you become tiny and people don’t understand it. They told me: ‘You are a boxer, strong and a warrior.’ Yeah, but I got smaller. The rest I saw, I did not ”, he confesses The Queen, which triggered the alarms of his coach, Jero García, during a weigh-in for a championship. He saw some bruises that were not from the ring: “They were marks on an arm, the result of a grab. Asking me, he scared me to tell him the truth and I ran away. She looked for me and I avoided him. I did not return until I was not able to face everything. That day she arrived, after anxiety and silence (“I was afraid they wouldn’t believe me”) had taken over her life. “He was nine months old. I took a huge blow to the cheekbone and fell to the ground. I tried to protect the belly, I thought my daughter had died. I had no choice but to report it,” he says with the strength that Zayra gave him.: “My courage and my luck was her. My daughter is my angel, she made me wake up.”

Carmen recognizes much of that story because the bullies use some common patterns. “We are together,” Miriam encourages her. “The other day, Minister María Jesús Montero said that women are tied by invisible threads that no one can cut. That’s what I felt listening to you. Something hard unites us that makes us strong”, the athlete answers. “I also lived through that annulment process. I was 29 years old then, with character, studies, work, home, friends… Nothing exempts you from being exposed. At first I stopped those humiliations and contempt, but for a month or a month and a half. We demand that victims leave or denounce their partner and the only thing they can do is survive”, Carmen exposes, while Miriam agrees: “Totally”.

His narrative continues. “Then I learned concepts such as gas light… I wasn’t sure of anything because he turned everything around and blamed me. There was always conflict. Verbal aggression gave way to physical. The last attack was throwing me from a third floor. I survived, although you have sequelae and I’m not just talking about the spinal cord injury…”, points out the Paralympian. This episode —happened on that fateful March 12, 2012— left her in a wheelchair and she almost did not tell it. “There were neighbors who heard me scream, the blow and came down to help me. The health services came, the Police… No one initiated an investigation, nor did they take a statement from him or a neighbor. I went directly to the ICU, where I was intubated for 28 days, with assisted breathing… Nobody investigated until, six months later, I left the hospital and filed a complaint. I felt attacked by the system again because my case ended in a dismissal“, the Mint.

Miriam had more luck after her complaint in 2004. “There was a follow-up and they were very attentive to me. There I had to face and face what hurts“, Explain The Queenwhose tattoos remind him of who he is and all the way. Her skin bears the names of her children, a lioness, and on her arm she has the word ‘resilience’ next to a rose with its thorns. a metaphor for life. The sport erupted again like a catharsis, its rebirth from the ashes. “He gave me back the illusion and helped me trust again because I couldn’t see a man. I was enraged. My colleagues reached out to me and I understood that not everyone is the same”, says the boxer, whose most precious title was not achieved in the ring, but with the education of her daughter: “Her face at birth gave me strength. Now he is 18 years old and the values ​​that his mother has transmitted to him. She knows what she should allow and what not. It is my great satisfaction”.

“My son Bruno was the key to athletics. He empowered me and sport reconciled me with the human being”

Sport has also been a constant in Carmen’s life. Before the paraplegia, she rode bikes and horses, swam, climbed, went to the gym…and after that, she focused more on rehabilitation. His son Bruno was the turning point. His birth and death on September 4, 2018 became the second and most stark blow of life. “I went into labor and called 112 up to four times. My son was born at home, we were alone for 62 minutes and by the time the doctors arrived he had gone into cardiorespiratory arrest. He made it to the hospital alive, but he died. Although Bruno has changed the lives of many people… It made me feel that the most important thing is not life, but love. I loved him before he was born and I still love him after I die”, says the Paralympian, with a sweetness and love that fill Miriam’s eyes with tears. “Bruno was the key to athletics. I wrote her name on my chair and engraved her feet on a medal that I always carry with me and we walk the streets together. When I saw the difficulties of a person with a physical disability to run, I wanted to give him visibility and I created, together with my coach, Roberto Álvarez, an athletics club and a foundation: run for you. Bruno empowered me and sport reconciled me with the human being”, Carmen concludes excitedly.

Fear, lack of self-esteem, shame… They are the rope that traps the victims of these multiple forms of violence: social, economic, vicarious… But both athletes send a message of optimism: “There is life beyond.” Progress has been made in the fight against gender violence, although there is still a long way to go. The formula to eradicate it? “Respect, awareness… and help the victims”, proposes The Queenwho is currently Councilor for Women in Torrejón de Ardoz. That is his particular combat now, but warn. “I haven’t hung up my gloves yet, I have a farewell fight left,” she laughs, who was European champion and WBA Gold.

“Sport makes you let off steam and feel useful. It heals. We wouldn’t know how to live without it”

For Carmen, education is the key tool to end this scourge, which in 2022 has already claimed the lives of 38 women. “The 2004 Gender Violence Law was necessary, but not sufficient. Society has advanced more than the institutions”, says the athlete, Spanish champion of 800, 1,500 and 5,000 meters. His next objective – as long as his fractured tibia in his right leg allows it – will be to go for the Marathon. “It’s that sport allows you to let off steam and feel useful,” points out Miriam, to which Carmen adds: “It’s a healer.”. “We would not know how to live without it,” they point out.

Both athletes, whose lives have inspired two documentaries (Carmen Gimenez. One life to live Y Life in blows, The Queen), they melt into an accomplice embracesure that their paths will cross again. They are united by that invisible and already eternal thread, that of survival and hope.