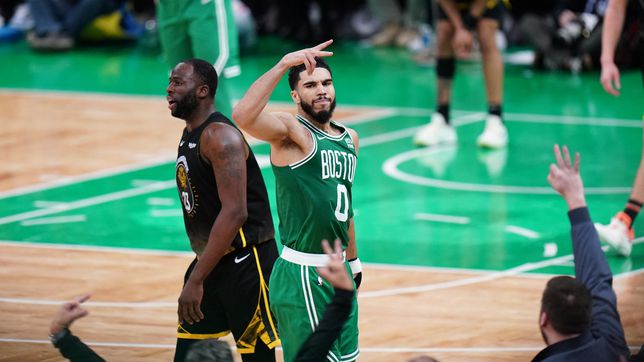 In the regular season, all victories are worth the same. That’s how it should be, but it’s not. Some matches are marked in red on the calendar and the Boston Celtics had tonight underlined with desire. The win is the eighth in a row for them and makes them maintain a gap of 4.5 games over the second-placed East. In the classification it is one more victory of the 34 that they have already carried out in 46 games. But in the head and heart of the locker room is one of the most important they have achieved this season. Because they have won the champion, which motivates anyone. Because the Warriors were champions at their expense, with the charge of revenge floating in the air. Why they had lost four games in a row against them, the last three of the Finals and the one of this course in San Francisco in December. And finally, why? the victory came coming from behind, having to come back, forcing extra time, suffering but winning. This time yes. we can beat them they will have thought with a satisfied smile.

Of course these Celtics, the best team in the league without a doubt, can beat this version of the Warriors which still does not have much to do with those who were proclaimed champions precisely in Boston seven months ago. The Californians swarm through the middle part of the Western conference, trying to enter the top six, but with an eye in the rearview mirror of those who come from behind and could even leave them out of the play-in. Meanwhile, in Boston they lead the league with an iron fist, with a 73.9% win rate and the feeling that there is no better team on the NBA courts. In the broadest sense of the word team. But even the groups that are closest to perfection can get a stone in the shoe. Small to the naked eye but hard to forget if you don’t take it off. Y the Warriors were beginning to be that pebble on the Celtics’ head. Until today.

Y It won’t be because the San Francisco team didn’t try to continue its role as Boston’s bête noire. in the last few months. They had the game in their hands, they were better for much of the second half and the Celtics had to use their famous pride to come back from a game that was slipping away, again, like in the fateful fourth game of the Finals, when they were leading 2-1 and were ahead on the scoreboard in the last quarter playing at home. That day they ended up succumbing to Stephen Curry, in what is surely the point guard’s most important match of all those he has played in a Final. Occasions like these cannot be wasted, because you never know when they will return. The Celtics did not win a game again, they were left with honey on their lips and have had to wait until today to have their spiritual revenge. Jaylen Brown, 16 points and 9 rebounds, was going to hit her only triple of the game with 17 seconds left to force overtime. But it was going to be Jayson Tatum, of course, and Al Horford who signed under the final victory.

The Dominican (20+10 and 3 blocks) took to the track “as if he were 25 years old”Tatum would later explain. “I wanted to win with all my might,” confirmed the center. He was the one who gave his team the first impulse as soon as he went out on the track, when the Celtics were better than his rival. Later the match was balanced and Curry was doing his thing: 29 points, 7 assists, 3 steals and 6 triples, one of them from the middle of the field. When the champion seemed to have dominated his rival again, Tatum took the controls like the superstar that he is. In December, when the Celtics lost at Chase Arena, the forward had 18 points on 6/21 shooting. In the Finals in June he was not at his best level either. He also had his own stone in his shoe with the Warriors and he also removed it today. 34 points, 19 rebounds (personal best), 6 assists and 3 steals. After a 3-pointer from Curry that put the Warriors up 110-111 in overtime, Horford was going to answer with another 3-pointer preceded by a layup from Brown and followed by another 3-pointer from Tatum. Everything in a row left the locals 118-111 with 1:25 left. They were going to relax a bit, to the point that Jordan Poole (24 points) had a long shot to force the second extension. This time, unlike Curry’s a while before, he didn’t go in. And the triumph stayed in Boston. One more win when you look at the standings. A very important one when you look at the faces of the Celtics players, who today feel even more powerful.

Suspicions of favoritism: Olivier Dussopt will "continue to convince of (his) good faith"