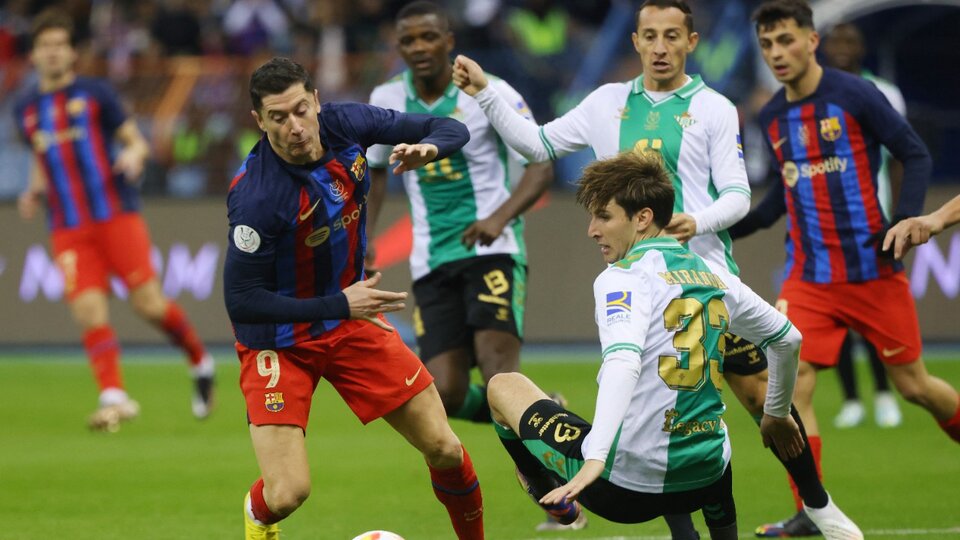 Barcelona beat Real Betis 4-2 in the penalty shootout, after equalizing 2-2 in 120 minutes of play, and advanced to the final of the Spanish Super Cup in which they will face Real Madrid.

The match took place at the King Fahd stadium in Riyadh, the capital of Saudi Arabia, and Germán Pezzella and Guido Rodríguez, world champions with the Argentina National Team in Qatar 2022, played for Betis. The midfielder was replaced five minutes after the epilogue by the Mexican Andrés Guardado, who was expelled shortly after.

The match was even and exciting, both in the regulation 90 minutes (which ended 1-1) and in the supplementary one, which ended 2-2 and sent the definition to a penalty shootout.

The goals for Barcelona were scored by the Pole Robert Lewandowski and Ansu Fati, while Betis equalized twice through the Frenchman Nabil Fekir and Loren Morón.

In the penalty shootout, Barcelona converted all four shots it took; while the German Marc André ter Stegen, goalkeeper of the culé team, kept the shots of Juamni and the Portuguese William Carvalho, to decree the classification of the Catalans to the final and the elimination of the team led by the Chilean Manuel Pellegrini.

The current champion of the Spanish Super Cup is Real Madrid, who beat Barcelona 3-2 in the previous final, so the same protagonists will repeat themselves in the decisive match on Sunday.