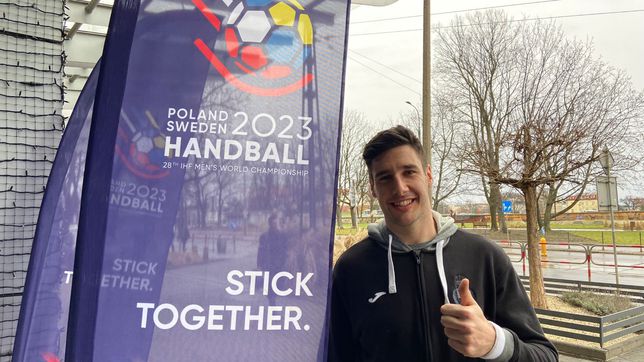 It could be an inconsequential match for Spain, but it is necessary to beat Iran for the Hispanics to go to the second round with four points and Jordi Ribera reminds his men of this. Abel Serdio (Avilés, 28), one of the Spanish rookies, knows it: “We don’t want it to happen to us like against Chile, that we did not end up very happy. It is about deciding beforehand and not having trouble”.

Abel considers that he has arrived in time to enter a team in which he had not yet found a place for key moments: “This my first important tournament; Jordi called me, but he didn’t get me the position. This time yes, and the truth is that against Chile, in my debut in the World Cup, I had contradictory feelings, because I was happy because that day had arrived, but very responsible because I wanted to look good and like the coach, so that he can continue counting on you ” .

He went through football. Abel started in soccer, but left it because “he didn’t see a future there,” he says. Adrián Fernández, Torrelavega’s central defender now, convinced him to accompany him “and it was one of the most important decisions I’ve made in my life” assures this 1.95-foot pivot, who stood out in Valladolid “where the important thing is to enjoy, without further motivation.” And from there to Barça, “That was an important step, and to see things in a different way, because it was a professional mentality”. It did not materialize and he decided to go to the Polish Plock where he is celebrating his third season: “I am happy there, because I play, I am important, they treat me well, and although my Polish is very primary, as the coach is Spanish (Sabaté) I have no problems”.

He says that between him and the three from Kielce “there is a good atmosphere, and also now my team is beginning to beat them; so we slammed each other ”but Abel doesn’t miss the moment to highlight Álex Dujshebaev:“ he is one of the best players in the world and he shows it when he is needed. On Saturday, when we weren’t very in tune against Chile, he threw the team on his back and made the difference ”.

Regarding his role as a pivot in Spain, Serdio is clear that it is a fundamental position “because Spain has always had a reference there, with Urios, with Aginagalde and now with Figueras. This season I have shared three months with Sarmiento in Poland, and it is a pleasure how he assists you, in the same way as in the national team”.

He knows that today “it is necessary to win clearly”, and regarding the championship “Spain has won to count on it because it has been on the podium in the last four years” and he does not understand that successes “that stand out all the players”