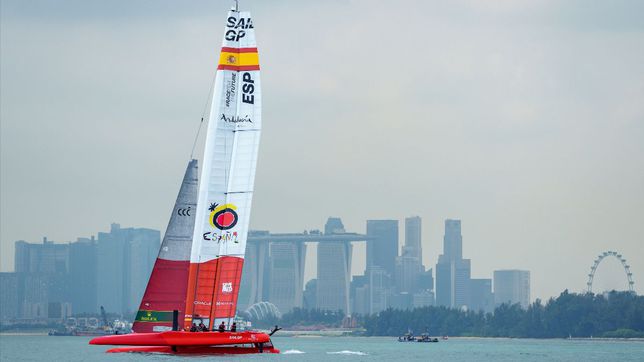 Spain is being a want and I can’t in this season 3 of sailGP. Illusion, quality and desire are not lacking in the team led by Jordi Xammar, but getting good results on a regular basis seems like an impossible mission. Can’t react and After eight Grand Prix disputed, the F50 Victoria occupies the penultimate place in the general classification with 24 points. And he must be very careful because Switzerland, which debuts this year in SailGP, is only one point below (23) and last weekend, at the Singapore Grand Prix, was able to win a race.

SailGP Season 3 is very similar to a crossroads for the F50 Victoria and it was confirmed last weekend at the Singapore Grand Prix. The Spanish boat once again accumulated problems and bad results. Between the days of Saturday and Sunday, he participated in four races and the best loot was sixth place (nine boats compete) in the third. To this sixth position he had to add a seventh and last two, which left him sunk in the ninth overall position, last, in the Singapore classification. Problems, and doubts, accumulate. Jordi Xammar, Olympic medalist in Tokyo, treasures quality and ability and is only asking for time for a young team that also includes Diego Botín and Florian Trittel, who in Paris 2024 will be favorites to win a 49er medal. The problem for the F50 Victoria is that patience is not eternal.

The SailGP competition is not easy and it is that famous sailors such as Peter Burling, Tom Slingsby, Ben Ainslie and Jimmy Spithill are measured. Spain needs to improve its numbers and the path is set. There are three Grand Prix remaining to finish the season, Australia, New Zealand and the United States, which are three opportunities to get rid of the bad taste in the mouth that prevails in the Spanish team. It is true that a race was won in Dubai, the only one this year, and the objective, vital, is that it does not remain as an anecdote. Apparently, Singapore is far away again, although there is time to learn from mistakes, react and show that Spain wants and can compete in a SailGP that has Australia, led by Tom Slingsby, as the great dominator (she was the champion in the two previous seasons) and is the current leader of this campaign 3.