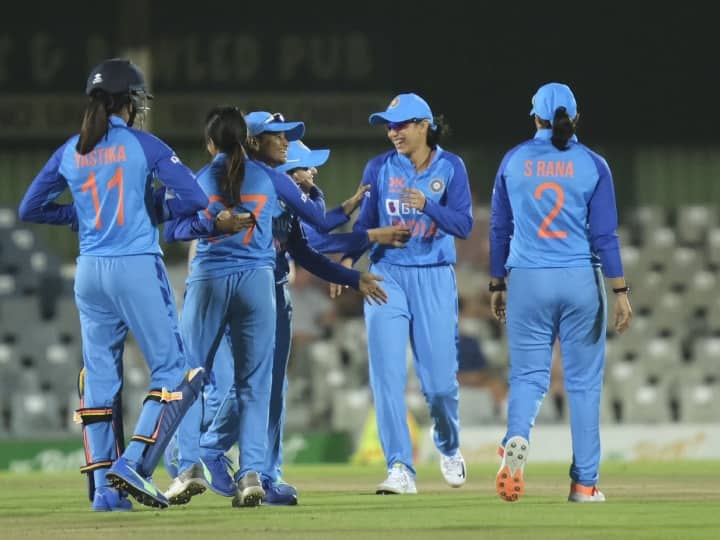 India recorded their second consecutive victory in the women’s T20 triangle series being played in South Africa. In the match played on January 23, the India team defeated West Indies by 56 runs. Smriti Mandhana played an important role in the victory of the Indian women’s team. She played an unbeaten innings of 74 runs while batting excellently. Batting first, the India team scored 167 runs to 2 wickets. Chasing the target, the West Indies women’s side could only manage 111 for four wickets in the stipulated 20 overs.

In the match played at Buffalo Park East London, the India team won the toss and batted first. Yastika Bhatia and Smriti Mandhana, who came on to start the innings, added 33 runs for the first wicket. Yastika came out after scoring 18 runs. Harleen Deol, who came to bat at number three, was unable to do anything special and went on to score 12 runs. After this, Smriti Mandhana and Captain Harmanpreet Kaur took over. Making these two century partnerships, India hit a respectable score of 167. Smriti played an unbeaten 74-run innings from 51 balls while batting furiously. He hit 10 fours and one six in his innings. While Harmanpreet Kaur was not left out after scoring 56 runs from 35 balls.

Chasing the target of 168 runs for victory, the West Indies team could only manage 111 runs for four wickets in 20 overs. Faced with strong Indian bowling, the Windies team batsmen did not work. Shikha Pandey, Rajeshwari Gaikwad and Radha Yadav all played hard for India. Facing them, the Windies struggled to score runs at bat. Together these three bowlers gave just 44 runs in 12 overs. For Team India, Deepti Sharma picked up 2 while Radha Yadav and Rajeshwari Gaikwad picked up 1-1 wickets. For the West Indies, Shaman Campbell was the top scorer scoring 47 and Hayley Mathews 34 runs. Smriti Mandhana, who played a grand innings of 74 runs in the match, was awarded the Man of the Match award.