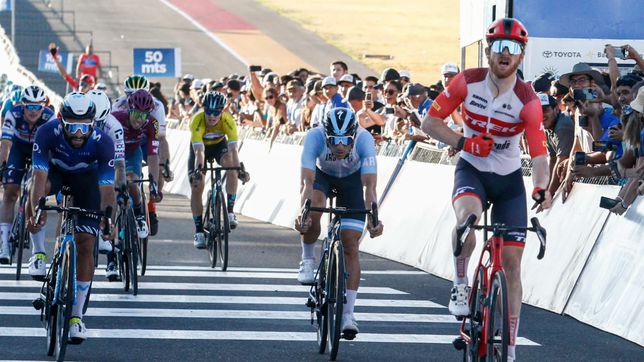 The landscape of San Juan went from desert to vineyards. A part of the Argentine culture and its gastronomy lives in this part of the country. The best wineries in the south of the continent saw the peloton of the best cyclists in the world pass by. Bottles and pedals on flat terrain with a third category mountain prize and a small final slope.

With 35 kilometers to go to finish at the Villicum Autodrome, the party is over for the three escapees of the day. Two locals, Luka Dundic and Nahuel Méndez and the Chilean José Luis Rodríguez that they had the opportunity to show off the colors of their flags before giving way to the packaging.

In the last part of the tour, the most active teams were Bora, Soudal and Movistar. As in the two previous stages, the squads of the favorites led the pack to avoid setbacks and with only 10 kilometers to go, those interested in the stage began to plan their strategies.

4 kilometers from the finish line, a fall occurred in which several cyclists who were located at the rear of the peloton were involved.which the Italian Simone Bevilacqua from Eolo took advantage of to make an attack that did not prosper.

In the last kilometers another attack took the favorites by surprise. The one who did it was Quinn Simmons from Trek Segafredo who did not give in to the belated reaction of the usual packers. The only one who could follow him was Maxi Richeze. The two made the one-two of the stage.

One just beginning his career at the age of 21 and being one of the promising Americans and the other, already a few days after finishing his sports career.

In the third place came Sam Bennett and in the fourth, the Colombian Fernando Gaviria. The Soudal train lost power when Simmons made the attack.

The leader of the general classification is still Sam Bennet, in second place is Fabio Jakobsen and in third is Fernando Gaviria.

Fourth stage of the Vuelta a San Juan

The fourth stage of the Vuelta a San Juan will begin at the Villicum Autodrome and end in Barreal. It will have 196 kilometers and three mountain prizes, two in the third category and one in the first category.

The stage could be for packers again if the mountain prizes pass without problems, however, it may also be given for a breakout of one of the favorites or a surprise attack in the top-notch port in Virgin of Andacollo.

Presentation calendar F1 2023: when each team and drivers present their car