Scientific Voyages – Where is Galileo’s Telescope?

Galileo pioneered the use of the telescope to observe the night sky. His discoveries undermined traditional ideas about a perfect, unchanging cosmos with the Earth at the center.

The first record of a telescope comes from Holland in 1608. It is a patent registered by the Middelburg eyeglass maker Hans Lippershey with the States General of Holland on October 2, 1608 for his instrument “to see distant things as if they were near.” This is where its name comes from, from the Greek tēle (far) and scopeo (I see).

News of this invention soon reached an astronomer born in the Florentine city of Pisa named Galileo Galilei. Just a year later, in 1609, he designed a variant of the refracting telescope that is now known as the Galilean telescope. The Galileo telescope design incorporated a converging lens (plano-convex) as the objective and a diverging lens (plano-concave) as the eyepiece. The great advantage and genius of Galileo’s telescope design is that it produced a vertical, non-inverted image because its design has no intermediate focus. 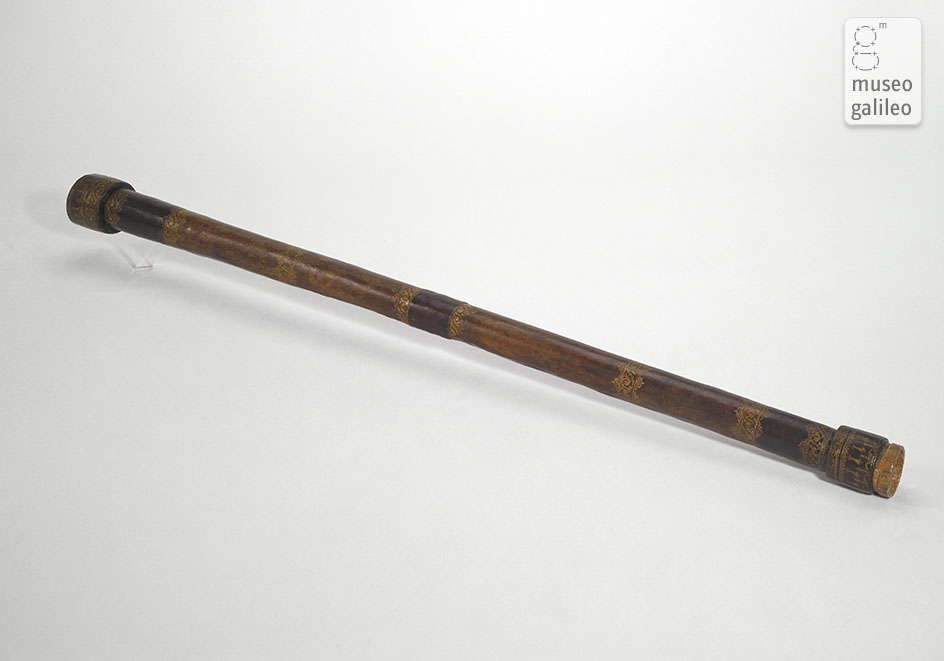 Institute and Museum of the History of Science

The telescope allowed Galileo his greatest astronomical discoveries. He confirmed the phases of Venus, observed Jupiter’s four largest satellites, Saturn’s rings, and analyzed lunar craters and sunspots. All of these observations clearly contradicted the Ptolemaic view that the Earth was at the center of the universe and arguably supported Copernicus’ theory of heliocentrism: the Earth revolves around the Sun along with the rest of the planets. His publications were investigated by the Roman Inquisition in 1615, which concluded that heliocentrism was insane, absurd, and heretical, as it contradicted Holy Scripture. Galileo was tried, forced to recant and spent the rest of his life under house arrest.

Where is Galileo’s telescope?

If today we want to contemplate the instrument that changed Galileo’s life, and with it humanity, we will have to travel to the city of Florence and visit the Galileo Museum, former Istituto e Museo di Storia della Scienza. The museum occupies Palazzo Castellani, an 11th-century building on the banks of the River Arno and close to the Uffizi Gallery.

The Galileo Museum has one of the largest collections of scientific instruments in the world, a testament to the role that the Grand Dukes of Medici and Lorraine gave to science and scientists. After years of renovation, it opened with its current name four hundred years after the March 1610 publication of Galileo’s Sidereus Nuncius (The Messenger of the Stars).

Here we can find the original telescope made by Galileo. It consists of a main tube with separate housings at each end for the objective and eyepiece. The tube is made of wooden strips joined together and covered in red leather, which has turned brown over time, with gold engraving.

The telescope measures almost one meter in length. The plano-convex lens, with the convex side facing out, has a diameter of 37mm, an aperture of 15mm and a focal length of 980mm. The original eyepiece was lost and was replaced in the 19th century by a biconcave eyepiece with a diameter of 22 mm.

It is inscribed in the 1704 inventory of the Uffizi Gallery as «A telescope by Galileo, 1 2/3 arms long in two pieces to lengthen it, covered in leather of various colors and with gold fittings, with two lenses, of which the eyepiece is at an angle.

Galileo has designed ingenious accessories for the telescope’s many applications. One of the most important was the micrometer, an indispensable device for measuring the distances between Jupiter and its moons. Another was the helioscope, which made it possible to observe sunspots through the telescope without risking damage to the eyes.

Initially, the telescope designed by Galileo could only magnify objects about 30 times. This early design had some flaws, such as the narrow field of view and lens shape. This produced blurry and distorted images. Despite these flaws, however, Galileo effectively used the telescope to study and explore the sky with such precision that his discoveries brought him to justice.

His judges are said to have refused to look through the telescope to see for themselves the truth of what Galileo had observed. History proved him right, although it took his accusers a long time to admit their mistake. It was not until 1992 that Pope John Paul II recognized that the Church was wrong in condemning Galileo for claiming that the Earth revolved around the Sun.

At least 27 dead after landslide in Colombia

Quarterfinals of the 2022 World Cup: classified teams, table, crosses, schedules, matches and when they are played