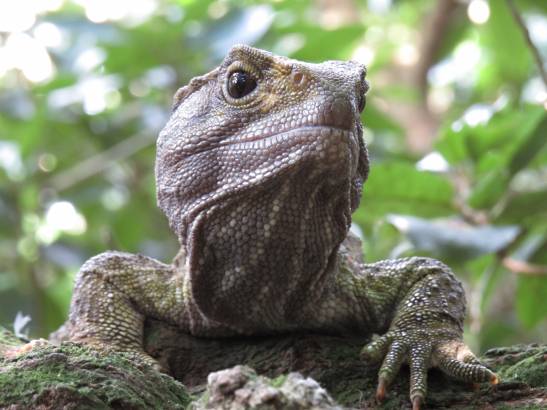 the land animal oldest in the world is Jonathan, a giant turtle who lives in the Seychelles archipelago and who turned 190 a few months ago. It is estimated that born around 1832although as there was no record he could have done it even earlier.

Jonathan is also the longest-lived reptile in history. However, his is not the only case. Some species of turtles and other ectotherms (cold-blooded animals) are known to have a extraordinarily long life.

The oldest land animal in the world is the giant tortoise Jonathan. It is estimated that he was born around 1832

In fact, the magazine Science publishes this week two independent studies on the aging and life expectancy of these long-lived animals. The first of them, carried out by researchers from the University of Southern Denmark (SDU), analyzed turtles of 52 different species that live in zoos and aquariums from many countries.

“Usually the evolutionary theories aging tests were done in mammals. Therefore, it was possible to verify that this process exists in them and in birds, but this was not always verified in reptiles and amphibians, which have life cycles and survival strategies very different”, explains Fernando Colchero, co-author of the study.

The second investigation, which brings together an international team of 114 scientists, studied reptiles and amphibians from 77 different species that live loose in over 100 cities around the world.

If we can understand what allows some animals to age more slowly, we can better understand aging in humans.

“If we can understand what allows some animals to age more slowly, we can better understand aging in humans and also define conservation strategies for reptiles and amphibians, many of which are threatened or endangered,” explains David Miller, lead author at the University Penn State.

Turtles in zoos and aquariums

In turn, experts from the Danish university observed that 75% of the analyzed turtle species show extremely slow senescence and, in some cases, even the lack of biological aging, which is defined as insignificant.

The end insignificant senescence was coined during the last century by biogerontologist Caleb Finch to denote organisms that show no evidence of biological aging, such as measurable reductions in reproductive capacity or increases in mortality rate With the age.

As explained by Dalia Conde, another of the authors of the first study, many species of turtles can reduce their aging rate in response to better conditions of life in zoos and aquariums compared to nature.

Many turtle species can reduce their aging rate in response to better living conditions in zoos and aquariums.

This means that senescence it’s not inevitable for all organisms”, comments Rita da Silva, first author of the article.

In primates, including humans, the improvement of environmental conditions determines a decrease in infant mortality, but aging rates do not change or change very little. This is very typical in many groups of mammals and we believe possibly also in birds, but this was not the case for turtles”, adds Colchero.

According to some evolutionary theories, senescence appears after sexual maturity as an exchange between the energy an individual invests in repairing damage to his cells and tissues, and the energy he contributes to reproduction so that his genes are passed on to succeeding generations.

This compensation implies that, after reaching sexual maturity, individuals stop growing and begin to experience senescence, gradual deterioration of bodily functions with age. Before, the consensus was that the most complex organisms could not stop aging. However, there are species, such as many turtles, that at sexual maturity they keep growing.

“It is surprising in turtles and many reptiles that not only do they seem to be able to slow down the rate of aging, but also their ability to reproduce increases with age. For example, the number of eggs a female turtle can lay when she has just reached sexual maturity is only a fraction of what she can lay when she is older, and this is because she effectively has more capacity,” he adds.

Keep in mind, however, that the fact that some animals have negligible senescence does not mean they are immortal: their risk of death does not increase with age, but it is still greater than zero.

“Despite being in zoos and aquariums these animals are not exposed to certain potential causes of death such as predation, they will all die at some point, due to unavoidable causes like diseases”, explains Colchero.

Reptiles and amphibians that live in the wild

The authors of the second study document that several animals have particularly low aging rates; in addition to turtles, there are also crocodiles, salamanders and frogs, among others. “It seems pretty drastic to say that they don’t age, but basically, once they stop reproducing, their probability of dying doesn’t change with age”, explains Beth Reinke, a researcher at the University of Northeastern Illinois and first author of this study.

The team noted that the attributes protectors of these animals contribute to determine a slower aging, in some cases, even ‘insignificant’.

This hypothesis, calledof protective phenotypes suggests that animals endowed with physical or chemical characteristics that provide protection, such as thorns, shells or venom, age more slowly and have greater longevity than animals that do not have these types of attributes.

The ‘protective phenotypes hypothesis’ suggests that animals with protective traits have slower aging and greater longevity.

Beth Reinke, researcher at the University of Northeastern Illinois and first author of the study, explains: “These protective mechanisms can reduce the death rate of animals because they are not eaten by other predators, therefore they are more likely to live longer. which, in turn, exert pressure so that they age more slowly”; and adds: “we found the most relevant support for this hypothesis in turtles; it shows that they are unique.”

The authors of the American study applied comparative phylogenetic methods (which make it possible to study the evolution of organisms) that consist of capture wild animals, tag them s return them to naturein order to get data about them.

The objective of this research was to analyze the difference in aging and longevity between ectotherms and endotherms (warm-blooded animals) live in freedom.

In ectothermic animals such as reptiles and fish, body temperature varies with the outside temperature. Endotherms, on the other hand, like humans, generate their own heat internally.

Miller explains that the ‘hypothesis of thermoregulator mode‘ suggests that ectotherms, who use external temperature to regulate their body temperature and therefore generally have lower metabolisms, age more slowly than endotherms. “People tend to think, for example, that mice age fast because they have a high metabolismwhile turtles slowly age due to their low metabolism”, adds the researcher.

However, the team’s findings reveal that the aging rate and lifespan of ectotherms vary greatly above and below similar-sized endotherms. This suggests that the way an animal regulate your temperature it is not necessarily indicative of its aging or its longevity.

“We find no support for the idea that a metabolic rate smaller means ectotherms age more slowly,” explains Miller. “This relationship is only true for turtles, suggesting that they are single among ectotherms”.