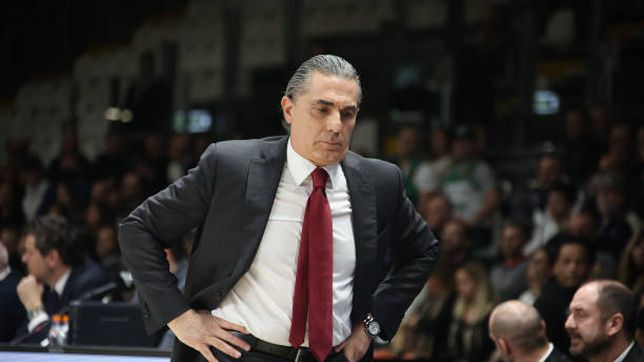 Sergio Scariolo went through the podcast The Crossoverfrom a European basketball legend like Joe Arlauckasto comment on his time on the bench in our country, the change in the game in modern basketball and a curious anecdote.

The coach of the Spanish team pointed out how important it is to make the leap at the right time to the right place. The Spanish league, in constant growth, was his goal on the bench. “Probably there was no better place to take the first step outside your country than Spainand specifically victorywhere there was a lot of energy, a lot of enthusiasm, a lot of desire to go up to the next level”, Scariolo commented in the interview.

His stage in Baskonia, at that time TAU Ceramicconcluded with a trip to the championship final and the Copa del Rey of 1999. His next step was Real Madridwhere did you get the domestic championship in the first campaign1999/2000) and raising the runner-up in 2001. The last on the list was Unicaja. The Italian coach lands in Malaga in 2003and ends his stage in 2008 with a Cup (2005), a League (2006) and a place in the Final Four of the euroleague in 2007.

Throughout his coaching career, he has had to deal with star-studded locker rooms. On how to control the ego and make the team the first option, Scariolo had a few words. “you have to really be available to play with other classmates as a team, to share the ball, because nowadays the defense will be able to silence an egoisteven if he is an extremely talented player, much easier than before”, explained to Arlauckas in the interview.

“So first of all you have to feel the will to play together with your teammates, to share the ball. And second, you have to share the willingness to play defense.” clarified the four times Eurobasket champion (2009, 2011, 2015 and 2022) “Those two principles are not negotiable. I could hardly coach a player not really interested in thiscommitted to this. Then, everything else can have more or less flexibility”, he detailed.

After three seasons with Toronto (2018-2021), Scariolo was returning to his native Italy to train. “I remember that the night before the day I decided was the only sleepless night I had ever had. in the last 20 years, even before or after a game. She couldn’t close her eyes all the time. And then after I made the decision, I thought: ‘Hey, it was a no-brainer‘” commented the technician.

Now, to your 61 yearsand after winning the last edition of the EuroCupScariolo wants to continue making history in a Virtus that received him with open arms since his arrival.

The selector also reviewed in The Crossover his time in the NBA as an assistant to Nick Nurse in the Toronto Raptors, three years in which he won a championship ring, in 2019 and in a team that included Marc Gasol and Serge Ibaka and that led the complicated one, due to his character, Kawhi Leonardthe tremendous forward (when injuries allow) who, as soon as he was proclaimed champion and MVP of the Finals in Canada, decided to go to California, his home state, to join the Los Angeles Clippers.

“I went to the NBA to get rid of all the issues of agents, the media, managers, fans, pressure… They wanted to commit only to the game”says the Italian, who insists on this introspection to study basketball as a key factor in his time in the US: “It wanted to say that I was tired and that I needed to immerse myself in the game 100%, without any more complications or external factors. pure basketball only. Going to train, studying and analyzing the games and not having to dedicate extra time to anything other than basketball. I learned a lot, from two points of view. First, it was a bath of humility because I was in a competition that is a league of players, and that shows when you are there. Especially if there’s a superstar on your team.”.

The Raptors star was Kawhi Leonard: “It’s a challenge being an NBA coach because you have to find a way to be respected. I remember that for the first few months, Kawhi wouldn’t even say hello to me. Or he told me with his mouth half closed “. That later changed: “In the ‘playoffs’ he approached me before each game, he wanted to sit down for ten minutes and review every aspect of the game that was going to be played. This is how our relationship evolved. But at first it was like ‘wow’. It’s not that the players can do what they want there, nor that the coach doesn’t have the power to make decisions. But you have to find a way to feel and understand what can be done, what makes sense, what they will accept and what words you have to use so that they understand what you want to do on a day-to-day basis. You have to pay maximum attention to the emotions of the players.”.

In addition, Scariolo revealed one of the main morals that he drew at that stage in the NBA: “Train without excess, without overdoing it. It’s not that you never train there, but you have to use different tools. You can’t kill players by having them run for two hours between matches. You have to work without contact training, but at the same time doing defensive exercises or three against five and four against five has helped me a lot for what I do now in Bologna”.