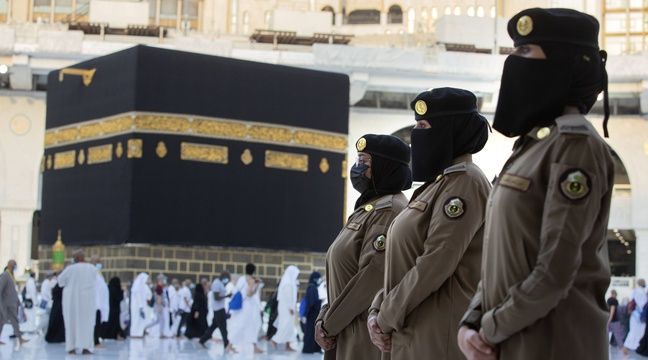 The date was not yet defined but it was expected. Saudi Arabia will allow pilgrims vaccinated against the coronavirus from abroad to carry out the Umrah, the small Muslim pilgrimage, 18 months after the closure of the borders of the kingdom, guardian of the two holy cities of Islam. Saudi authorities will begin accepting requests to enter the country from Monday, August 9, the official Saudi press agency SPA said on Sunday.

Foreign pilgrims wishing to travel to Mecca will need to be vaccinated, with a vaccine recognized by Saudi Arabia (Pfizer, AstraZeneca, Moderna and Johnson & Johnson), and submit to quarantine rules, the agency added, citing the ministry in charge of the pilgrimages.

Each month, up to two million pilgrims will be able to perform Umrah, previously reserved only for vaccinated pilgrims residing in Saudi Arabia. Authorities are in the process of establishing a list of authorized countries and are studying the measures to be implemented country by country, according to SPA.

The Covid-19 epidemic has severely disrupted the hajj, the great annual pilgrimage, and the Umrah pilgrimages, important sources of income for the kingdom. Last month, Saudi officials organized the hajj for the second year in a row amid a pandemic, limiting pilgrims to 60,000 Saudis and vaccinated resident foreigners, up from 10,000 the previous year. In 2019, 2.5 million people had performed the hajj.

The small pilgrimage, which unlike the hajj can be performed throughout the year, normally attracts millions of visitors from around the world each year. The announcement of the resumption of Umrah aroused the joy of the faithful. “I am relieved to resume Umrah. Psychologically I need to go to Mecca, ”Ahmad Hamadna, 33-year-old Egyptian sales director, told AFP.

However, the Egyptian engineer Mohammed Rajab, who lives in Australia, is concerned. “There will be a lot of people, and the possibility of contagion will be high, even if the pilgrims are vaccinated,” he said in a message. Both will not be able to travel directly to Saudi Arabia due to the suspension of direct flights between Egypt and Saudi Arabia, as well as the suspension of international flights to Australia.

In normal times, the hajj and the Umrah contribute about $ 12 billion (€ 10.2 billion) a year to Saudi Arabia, which is trying to diversify its ultra-oil-dependent economy. They are also a boon for airlines and travel agencies.

Hairdressers, tour operators or souvenir vendors … In Mecca, hundreds of thousands of jobs have suffered from the pandemic. In 2020, only 5.8 million people performed Umrah, a decrease of 69% compared to 2019 according to official figures. And during this year’s hajj, marked by a strict sanitary protocol, the streets of Mecca were almost empty. Stores remained deserted and some hotels and souvenir shops closed.

Since the start of the health crisis, Saudi Arabia has officially registered more than 532,000 coronavirus cases and more than 8,300 deaths. The government accelerated the vaccination campaign in early August, with the aim of reviving tourism and hosting sporting events and shows. Vaccination is now mandatory to enter public and private establishments, including schools and entertainment venues, as well as to use public transport.

At the end of July, the kingdom also announced the reopening of its borders to vaccinated foreign tourists from August 1. Long-held, the kingdom issued its first tourist visas in 2019. Between September 2019 and the border closing in March 2020, it registered 400,000 tourist visas.

Public debt: the measures envisaged by Bercy to reduce spending