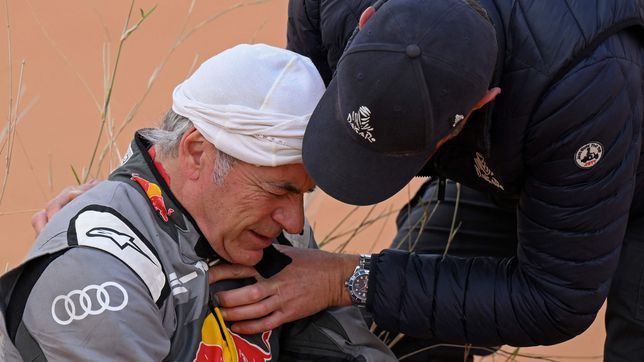 Bad news. Carlos Sainz is going to have to take a rest due to the consequences of the accident suffered in Arabia last Tuesday. The two-time world rally champion and triple winner of the Dakar has two fractured vertebrae, although luckily he will be able to focus on his recovery.

Sainz explained: “on my return to Madrid the back pain after what happened on the Dakar has persisted longer than normal. Following the doctors recommendation, I have undergone additional tests in order to accurately assess the extent of the injury. Unfortunately, they have not brought good news, since I have fractured vertebrae T5 and T6. The positive note is that both vertebrae are stable and from today my priority will be to recover as soon as possible. Thank you all for the support and love received in recent days. I will keep you informed.”

The accident suffered in Arabia was a very dry frontal blow when landing from a jump. It was so strong that, as explained by the Audi team, the carbon structure broke. But unfortunately, it also left scars on Sainz’s back. Luckily, he has recovered and, although he will have to maintain absolute rest for a few weeks, Knowing his tenacity and involvement, I am sure that in a short time we will see him back in top form. There is precedent that indicates that this type of injury can be cured fairly quickly. This is the case of Efrén Llarena, the European Rally Champion, who broke a vertebra in an accident in the Czech Republic and ten days later was running the Princesa de Asturias Rally.

The The motorsport legend’s next commitment is the inaugural event of Extreme-E, which will also take place in Arabia on March 11 and 12. It is surely the first goal that Sainz sets for himself, although it is also certain that he will give priority to recovery. At 60 years old, he has shown that he is still in top form, and everything must be expected from him.

Artificial meat dishes will now be available in the market