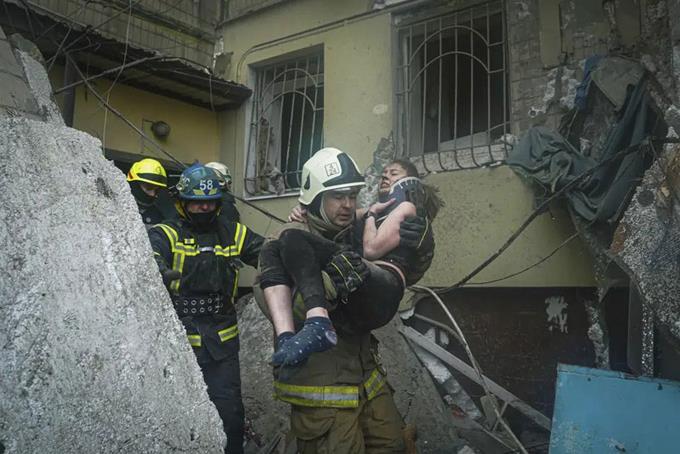 Ukrainian emergency teams on Monday examined what was left of a Dnipro apartment building that was destroyed by a Russian missile, placing the bodies of the victims in black bags and then moving them through piles of rubble.

Authorities said the death toll from Saturday’s attack had risen to 40, with 30 people still missing as of Monday.

Some 1,700 people lived in the multi-story building, and search and rescue teams have worked around the clock since the attack to locate victims and survivors among the wreckage. The regional government said 39 people have been rescued and at least 75 injured.

The reported death toll made it one of the deadliest attacks on Ukrainian civilians since before the summer, according to The Associated Press-Frontline War Crimes Watch project. Residents said the apartment tower did not house military installations.

Oleksander Anyskevych said he was in his apartment when the missile hit.

“Bom, and it’s over. We saw that we were alive and that’s it,” Anyskevych said Monday when he went to the site to see his vandalized apartment.

He told The Associated Press that he knew people who died under the rubble. One of her son’s classmates lost her parents.

Dnipro residents brought flowers, candles and toys to the ruins.

“All of us could have been in that place,” said Iryna Skrypnyk, a local resident.

The European Union’s foreign policy chief, Josep Borrell, described that and similar attacks as an “inhuman aggression” because it was directed against civilians. “There will be no impunity for these crimes,” he tweeted on Sunday.

When asked about the incident on Monday, Kremlin spokesman Dmitry Peskov said the Russian military does not attack residential buildings and hinted that the Dnipro building might have been hit by Ukrainian anti-aircraft fire.

The attack on the building came amid a broader barrage of Russian cruise missiles across Ukraine. The Ukrainian military said on Sunday that it did not have the necessary resources to intercept the type of Russian missile that hit the Dnipro residential building.

Meanwhile, heavy fighting continued in the Donetsk province of eastern Ukraine, where both sides are likely suffering heavy casualties, according to military analysts. No independent verification could be done at this time.