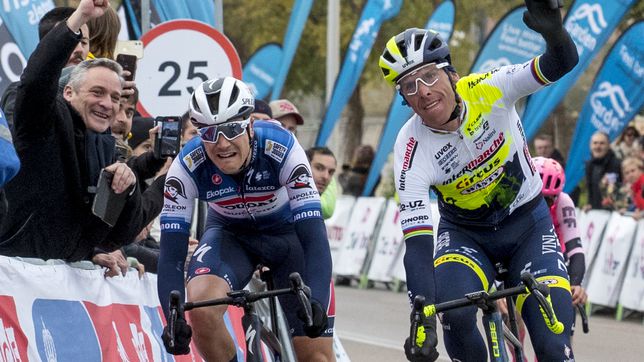 The Challenge de Mallorca usually serves to open the season for a good part of the peloton. This is the case of the Portuguese Rui Costa (36 years old), that he was world champion in 2013 and that he had a double premiere: The 2023 campaign started and wore new colors, those of Intermaché, after six seasons in the UAE: “It is an interesting change in my career that makes me motivated. I was used to teams that spoke Spanish (Movistar) and Italian (Lampre, UAE…) but now only english. another challenge”, he told AS in Palmanova before putting on his number. I “hoped” to be able to compete these days by feeling “good”, what perhaps I did not count on was such early joy, since he won the Calvià Trophy ahead of the Belgian Vervaeke and the Irish Healy.

In this way, Rui Costa cuts a drought of more than two years, since he was proclaimed champion of Portugal in August 2020, and adds a total of 28 successes, with the aforementioned rainbow of 2013 of unfortunate Spanish memory as the most precious conquest. Different from what has been experienced in recent years in the race, bad weather and rain made an appearance on a cold day, with a demanding route of five ascents starting and ending in Palmanova. After a whole night spent by water and wind, at least the storm subsided at dawn.

Alaphilippe (ninth) was in the spotlight and his powerful team, Quick Step, tried to get stronger in the final kilometres… and they almost did it, but they couldn’t with Rui Costa, with one of his old victoriesleaving the young Healy to work, who with a lot of impetus (he was in the reduced escape) prevented them from coming from behind, and then had to clinch Vervaeke. “It is a very special victory, because I am also winning again in Mallorca thirteen years later”, referring to the success he achieved in 2010 at the Deia Trophy at the then Caisse d’Epargne.

Rain and bad weather left drops, with top men knocked out, especially in the UAE. Wellens, McNulty… The countdown was approaching to finish the race and team cars with riders inside passed by the finish line. It will be another day, because as they are independent tests they can compete every day until Sunday. It is worth noting the sixth place of Carlos Canal, from Euskaltel, rubbing shoulders with the World Tour runners. A demanding day, both on the route and seasonally, which will continue this Thursday with the Ses Salines-Alcudia Trophy. Meanwhile, a happy Rui Costa will continue in action before having an ambitious calendar and “with freedom to contribute experience”: Comunitat Valenciana, Algarve, Ardeche, Itzulia, Ardennes, Romandie… an ‘old rocker’ that starts off in an unbeatable way.