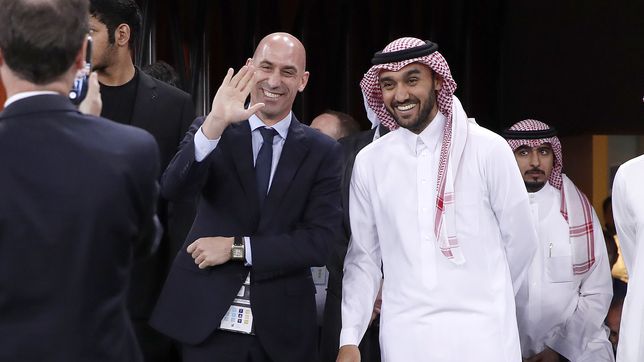 Luis Rubiales, president of the Royal Spanish Football Federation (RFEF), praised the work of Luis Enrique Martínez as coach and thanked him for the “regeneration of players” he carried out in office, but assured that “it is time to look for other things”. Give Spain to win again. “We have played in each game with our style, we have been superior to the rival but it has not given us to win”, Rubiales analyzed in Riyadh during the break of the first semifinal of the Spanish Super Cup.

“Luis Enrique has done a magnificent job, you cannot put a but on many things, but it is time to take another step and look for other things. We have trusted a figure we trust a lot like Luis de la Fuente. I think that the past stage has been very positive, with a regeneration with young players, and now we are looking for a change in which we are very hopeful”, he added in Movistar during the break between Real Madrid and Valencia in the semifinals of the Super Cup that is taking place. in Riyadh.

For Rubiales, the new stage of the Spanish team should leave more presence in the rival area: “The more games you win, the better. May Spain continue to have its stamp, having the ball more than the rival. In football everything is more beautiful if you win. We have a defined style, we need to have more presence in the areabut the last four years have been very positive for the team”.

The president of the RFEF did not comment on one Saudi Arabia’s possible candidacy for the 2030 World Cup, with Cristiano Ronaldo as ambassador, ahead of the one that Spain shares with Portugal. “I suffer many rumors that are not true and it is better not to enter, it does not correspond to me. I don’t know what Saudi Arabia and any world figure will do. We are working on presenting the best candidacy and we have many options. We have a country together with Portugal and the detail with Ukraine, which has everything to be able to organize the World Cup with an incomparable atmosphere. We will see what happens, ”she sentenced.