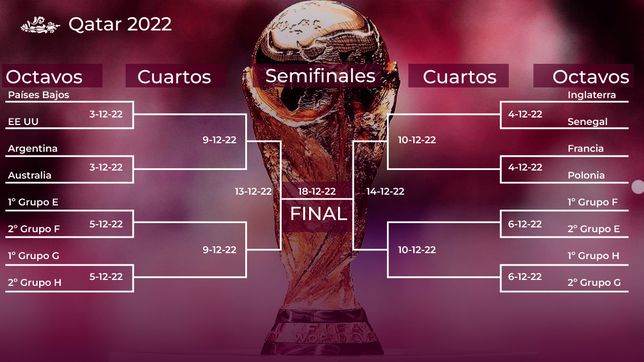 The round of 16 of the World Cup take shape after the conclusion of the last day of Groups A, B, C and D. Since Tuesday, the first duels were already known. The Netherlands will face the United States and England will face Senegal. This Wednesday two other qualifiers were set up. France, despite losing to Tunisia, finished first in Group D and will face Poland, who miraculously escaped elimination. Australia also confirmed their presence by surprising Denmark in a life-or-death duel. Their adversary will be Argentina, who after subduing Poland, achieved a leadership that seemed so far away after the disastrous debut against Saudi Arabia.

Likewise, the first schedules of the direct eliminatory rounds are also already known. The Netherlands and the United States will open the same on Saturday, December 3 at 4:00 p.m. in Spain. That same day, at 8:00 p.m., the Argentina-Australia game will be played. On Sunday there will be two other games: France-Poland (4:00 p.m.) and England-Senegal (8:00 p.m.).

The teams qualified for the round of 16

The first of the qualifying rounds to be played in the current edition of the world Cup is scheduled for next december third. Just one day after the group stage is over.

From that moment on, the matches corresponding to the round of 16 of the World Cup on three more consecutive dates: December 4, 5 and 6. In this case, and unlike the group stage, only two time slots will be chosen for the matches of this round to be held. In such a situation, they will perform well at 4:00 p.m. Spanish time, or at 8:00 p.m. Peninsula time.

Peru bogged down in parliamentary stubbornness