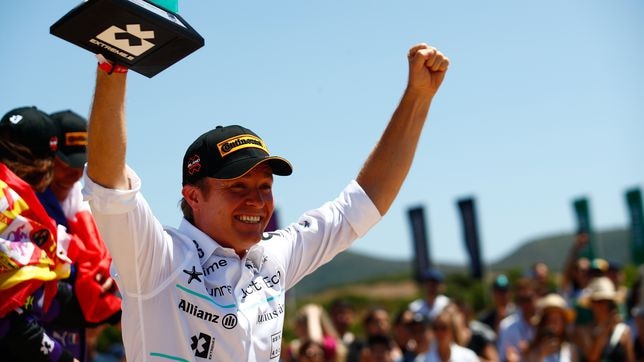 When is the ideal time to say goodbye? Nico Rosberg (37 years old, Germany) thought that just after going down in F1 history. The former Mercedes driver announced his retirement at the end of the 2016 season, but that did not mean that he would do so definitively. Yes as a driver, because except on specific occasions he is clear that he will not get behind the wheel of a competition car again, but not as a team leader (the RXR) which now continues to shower him with awards at Extreme E. He arrived at the electrical contest motivated by the motto of sustainability, because simply “winning was not interesting enough” for him, and he took all the learning from the great circus to make his duo the most successful in that championship that It has freed him from all “that dedication and inflexibility” that the World Cup demanded.

—They are close to being champions again, but a problem prevented them from revalidating the crown in Chile. What happened?

It was crazy! Half an hour before the final the car was working, but when it returned to the pits that was when it stopped working. What happened? We had a bit of water, probably from splashing on the track or some failure in the steering system or electronics, and that was what caused the system to stop working. It was all very weird. We couldn’t fix it because we didn’t know where the problem was, so it was crazy to end the weekend like this.

—But despite everything they continue to believe in the championship.

—From the first moment he has tried to work as he did in F1 to avoid problems like that.

Yes, the process (of work) It’s very similar to F1. We have a list where we write down all the bugs and that gives you a very structured approach to avoid any further issues in the future. In addition, there we also write down all the information we have from other teams and so on. Everything is so structured that sometimes it allows you to anticipate problems before they arrive, but there are things that you simply cannot avoid, such as the problem with water. It was inside the car and it’s something you can’t detect that easily. These things happen from time to time, but the F1 approach has really worked very well for us in these two years, because we have dominated against the competition in this championship. We are the team with the fewest problems of all, so we have done a fantastic job and also the speed has been incredible. But not only from our male pilot but also from Michaela (Ahlin-Kottulinsky), who is the fastest female driver in the world. She is driving in an incredible way, it is great to see her and that is also very important.

—Did you know from the first moment that you wanted to focus the project on what it is right now?

—Well, the project started from scratch and I had to focus thinking about gaining an advantage from the mechanics and the pilots. I think the whole set worked very, very well, but I just tried to put all my F1 learning into this championship, because in the World Championship I learned a lot in the engineering part and I discovered the structure, the meetings and everything. I’ve just tried to fit a lot of those things into the way the team works and it’s been amazing. But I am also very proud because it is my first time as team manager and CEO, and I feel very proud to have dominated a championship like this.

—How difficult is it to build a project like this from scratch?

—It’s a big challenge because it’s also a new championship, so at first you don’t really know what kind of talent you need. It was a really big challenge and the biggest challenge probably was to select the female drivers, because it really wasn’t clear who was the best in the world. In addition, there was the question of whether circuit drivers had any chance of running in the world of rallies. You wondered how long it would take for them to adjust, because Michaela had never done a rally, she drove on circuits and it was a challenge to figure out which woman was the right one. We had a great driver last year in Molly Taylor and we have another incredible driver this year in Michaela. That selection has been one of the coolest things ever and I actually reached out to them on Instagram with a direct message: ‘Hey, would you like to drive for my team?’

—Why did you decide on these pilots?

—Molly was Rally Australia champion beating all the men from his country, so he has great talent and was a great choice. And then Michaela, also last year, put in really special performances where she was actually riding as fast as the top men. But that only happened sometimes and I thought if we could do those performances together at every race with a little bit of practice and a little bit of my help from all my experience then that would be amazing. And that’s how it’s been this year, her performance is very, very special.

—A driver like you obviously wants the best project, but did you expect to win so imminently?

-Of course not. The competition is so tough… We have the greatest legends of motorsport during all the races. The competition is extreme. I never really thought we could be so unbelievably good. But of course I expected to do as much as possible and that has led us here. However, I’m not just here to win and get involved in what happens on the track. I also entered because I love sustainability issues and this championship works for the environment. For example, with my team we planted 3,000 trees in Sardinia near where we compete. We are making great initiatives and of course, we also love the issue of equality.

—So it was the whole issue of sustainability that convinced him to enter the championship.

—Yes, that is the main reason why I am involved in this championship. Otherwise I wouldn’t be here just to win. Just winning wouldn’t be interesting enough for me.

—If you had to choose another championship couple, what would it be?

—Do you still see them with possibilities this year?

—Just as you embarked on this project, do you see yourself leading any other?

-That is a good question. Many people have asked me since Extreme E is going so incredibly well, would I want to be a team principal for a Formula 1 team at some point. My answer is clearly no. The good thing about Extreme E is that there aren’t too many races. You know that right now we have five races a year and F1 has 24. It’s a full-time dedication of life. There is very little space in the World Cup to dedicate time to family, friends… and I already did that. The racing driver that I was and the current me, we never want to do that again. That intensity, that dedication, that inflexibility in life… I love my life now and that means I could never have a full-time job in Formula 1.

First Duvalier and then Moise’s death worsened the crisis