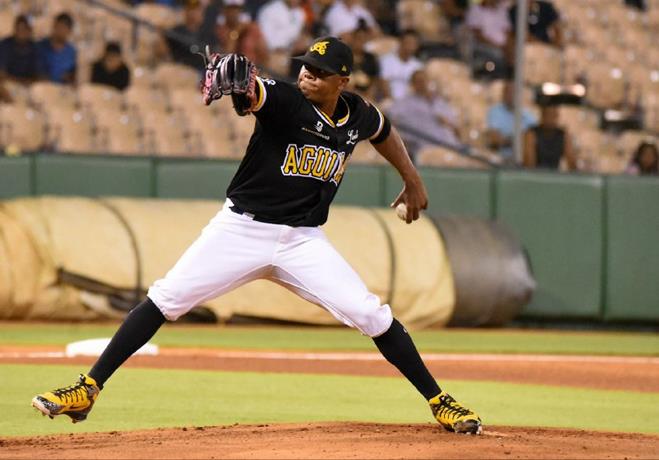 The Eagles with their victory achieved their fourth consecutive victory, putting their record at home 16-3, while on the road 12-8, for a record of 28-11, strengthened in the first position of the standing.

The Bulls suffered their fourth straight setback, now they have 15 wins and 23 losses.

The Águilas started with Roenis Elías (3-0) who once again had a quality outing, giving up just one hit, one walk and striking out 9, the most for an Águilas pitcher this season. His ERA was down to 1.32 and the WHIP was down to 0.80,

Julio Teherán (2-4) began pitching for the Bulls, who worked 3.1 innings, giving up seven hits, four runs, , no transfers and four strikeouts. He was seconded by Euclides Leyer (4) Alfredo Simón (5)

The Eagles offense was led by Andretty Cordero and Frank Schwindel, with a double and a single, Yoenis Céspedes a hit and two RBIs, Ronny Rodríguez, and Eliezer Álvarez a single and RBI, Wilmer Difó and Joe Hudson an uncatchable.

The three hits for the Bulls were distributed by Jhon Núñez, Vidal Brujan and Rodolfo Castro.

The Eaglets attacked with a three-out rally in the third after one out, when Robles was hit, Cade Gotta runs for Robles, Difó followed with a single to right field. Ezequiel Durán struck out, Cordero drove in the first with a hit to right, and Céspedes drove in the other two with a hit to center.

Yoenis was later tagged out running to third on Hudson’s single going out of play after suffering a sprained knee.

The eagles scratched the board two more times. One in the fourth, driven by Ronny Rodríguez scored by Schwindel, who opened with a double, and the other in the fifth, driven by Eliezer Álvarez with a single to right field, after Cordero’s double.

How harmful is cooking on a gas stove? New research by scientists