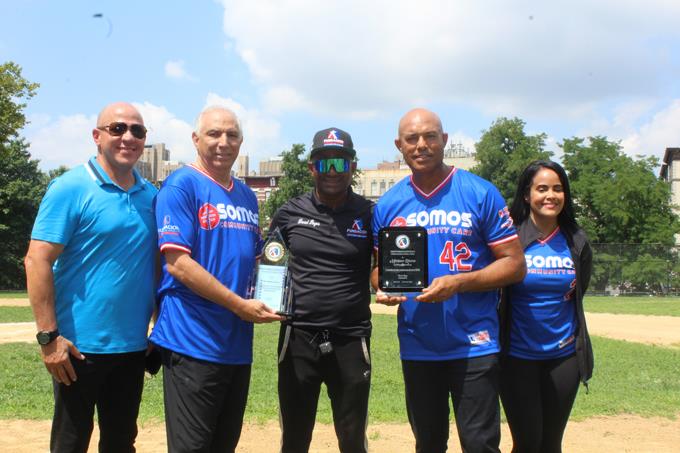 This summer the Dominican Sports Foundation in New York, Inc., celebrated 31 years of sports and social work, which would not have been possible without the support, dedication and dedication of the institutions and collaborators that are part of it.

To thank them and recognize their invaluable contribution, Mariano Rivera and Dr. Ramón Tallaj, who over the years have been faithful allies of this institution, were awarded awards at Highbridge Park in Manhattan.

This ceremony was presided over by the Board of Directors and the president of the FDDNY, Daniel -El Quemaíto- Reyes, who congratulated each of the honorees

“The FDDNY beyond the number of years that we celebrate, is important and transcendent because of the people who are involved in sports, the trust of parents of families and young people who come in search of a space for the preparation of their children and in which they adapt perfectly to baseball practices or other disciplines, are proof that for many generations the preference of choice is due to the quality of the work”, commented Mariano Rivera, at the time he received the distinction, and who is an ally of this Foundation for more than 25 years.

For his part, Dr. Tallaj thanked the Dominican Sports Foundation in New York for the recognition.

“The FDDNY is an institution that has earned the respect and admiration of an entire society,” said Tallaj, a supporter of the functions of this entity, which in addition to the internal baseball league for children, organizes several softball activities for adults and social activities in the community.

In his speech, its founder Daniel Reyes thanked the commitment and dedication of all the collaborators who have managed to position and grow this house of sports in this great city, which without their work and support would not have been possible.

Mariano Rivera, who has been linked to the FDDNY for years, is considered by many to be the best closer in the history of the Major Leagues, received 425 votes in his favor by the Baseball Writers Association of the United States, BBWAA for its acronym in English.

And it is that Rivera’s numbers during his professional career did not give for less. The only team he was on was the Yankees where he debuted in 1995 and retired in 2013.

He had 652 saves in his career and to put it in perspective on the MLB list his closest chaser is Trevor Hoffman with 601.

Rivera also won five World Series and was in the All-Star Game 13 times. This to name some of his achievements.