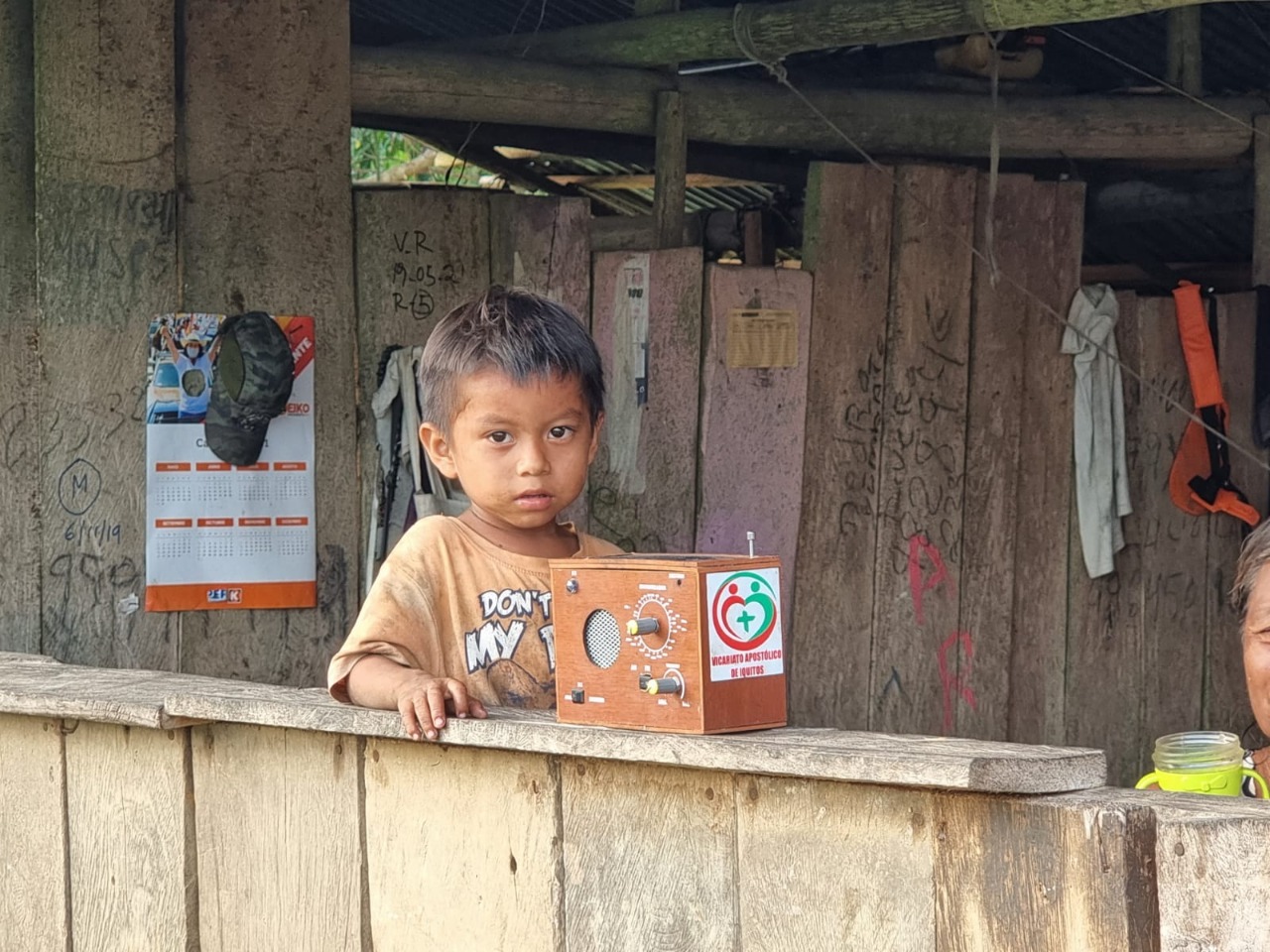 Reducing inequality is being possible with four renewable energy projects in the Peruvian jungle that have begun to improve the quality of life in communities.

As unlikely as it seems, there is no shortage of energy in the Peruvian Amazon. Less than 20% of the 2,703 native communities that inhabit this tropical forest have electric lighting connected to the public grid, but this significant deficit has been compensated with community sources of energy, such as solar panels or electric generators, present in 850 communities. Against this background, renewable energies have emerged over the last 10 years as a way to bring energy to a greater proportion of Amazonian households, a population that often feels forgotten.

“The potential of renewable energies for the Amazon is enormous”, Miguel Incháustegui, former Minister of Energy and Mines of Peru, told Diálogo Chino. “Currently in this region the largest proportion of energy is obtained from the use of fossil fuel, which is harmful to health and the environment. It is necessary and urgent to promote renewable energies with greater emphasis so that they are more widely used”.

In recent years, several initiatives have been launched to promote and provide access to renewable energy in Amazonian communities to reduce poverty. There are projects that have used solar energy to improve access to education, bring electricity to schools, homes and health centers and support community businesses with sustainable energy sources.

Radios that educate in the Peruvian Amazon

During the first two years of the Covid-19 pandemic, one of the most affected sectors was education. Although the Peruvian State promotes learning programs through television, radio and the internet and has distributed more than 1 million tablets with educational content throughout the country, around 42% of children and young people aged 6 to 16 years in the Amazon could not watch from a distance due to lack of electricity and connectivity.

In this vast region, according to the INEIthe national institute of statistics, about 2,604 native communities have some educational institution, 17.1% (444) have electric lighting and 13.7% (358) use solar panels, while 64.3% (1,675) do not have access to none of these services.

Many homes, health centers and educational institutions use generators for power, which is expensive and requires gasoline (which is often unavailable). As a result, communities spend much of their small income on fuel and generator maintenance.

In 2021, the Apostolic Vicariate of Iquitos, a Catholic mission based in Iquitos, the largest city in the Peruvian Amazon, has proposed to help improve access to education by developing and distributing solar radios so that young people can follow the training offered by the Ministry of Education (‘Aprendendo em Casa’) and the Loreto Regional Directorate of Education (‘Aprendiendo al Son del Manguaré’) through local radio stations and the Vicariate’s radio station, ‘La Voz da Selva’.

“Although this started in favor of education, we all know the importance of a radio in the home, especially in places where there are no other means of communication. Therefore, they are not only useful for classes, but also for informing yourself.”, says Chino Miguel Fuertes, Augustinian Monsignor and administrator of the vicariate.

Since 2021, 6,000 devices have been distributed in 54 rural communities in the vast department of Loreto – the largest region in Peru, but also the least populated – and in the districts of Alto Nanay, Fernando Lores, Belén, Indiana, Iquitos, Las Amazonas, Mazán, Nauta, Parinari, Punchana and San Juan.

“Radios are eco-friendly. They are made with recyclable material and have built-in solar panels and rechargeable batteries, which enhance their use.”, adds Fuertes. The radios are battery-free and relatively inexpensive compared to the prices of computers and cell phones, costing between US$20 and US$25. The Vicariate’s next step is to build 16 radio stations throughout the Loreto region, all solar fed.

Light up the Amazon to reduce poverty

Those who are also interested in narrowing the inequality gap in education are light up the world (LUTW), a Canadian registered charity that in 2020 started the ‘Light Up the Amazon’ project. After identifying and evaluating indigenous communities without access to electrification, they decided to carry out electrification projects using solar systems in the Wampis communities of Soledad, Cucuasa and Dos de Mayo, located in the district of Río Santiago, in the Amazon region.

In 2021, six schools were electrified in these locations. “Thanks to this support, more than 487 students between the ages of 3 and 17, 45 teachers and more than 1,500 Peruvians from these native communities now have access to electricity.”, says Milagros del Carmen Huamán, its regional operations manager.

Currently, schools have systems ranging from 500 to 1,300 watts of solar modules installed, enough to simultaneously power small appliances such as fans, lighting and computers. The electrical installation was installed in each of the classrooms, offices and bathrooms with 5W spotlights and sockets for use with laptops, cell phones, TV, radios, projectors and blenders.

“We make a lifetime impact on our beneficiaries. We help them to stop using polluting fuel-based lighting as well as expensive disposable batteries. And we give them the opportunity to use useful technologies and tools in their daily tasks.”, highlights Huamán. The program is currently seeking to raise funds to electrify two more schools on the Santiago River.

Light at home to reduce poverty

Acciona Peru was created on the initiative of Fundación Acciona de España, a Spanish organization that promotes access to energy and water, as part of its Luz en Casa Amazonía project. In 2021, it put into operation a photovoltaic solar plant in the Copal Urco indigenous community, of the Kichwa indigenous people, in the Napo river basin, in Loreto. With its 33.5 kilowatts (kW) of installed power, it supplies electricity to 60 homes, community facilities and public lighting. Houses have six hours of light a day, three hours more than before. The schools, health post and community hall have electricity 24 hours a day, and lighting continues for three hours.

The project also seeks to avoid the emission of more than 50 tons of CO2 per year, for which its electricity storage system in 110 kWh lithium batteries is essential. Diesel, fuel often used for generators, is relegated only to cases of extreme urgency if there is a failure in the photovoltaic system.

“Our business model is a social microenterprise”, said Chino Jessica Olivares, manager of Acciona Peru, adding that both sustainable economy and well-being are important for the project. “We charge an affordable fee for the service we provide”.

According to the project’s calculations, residents of Copal Urco spend between US$ 5 and US$ 7 per month to supply themselves with energy (buying diesel, candles, kerosene). Now the quarterly fee is $2.50.

These homes are served through the Luz en Casa centre, managed by a local businessman whom Acciona has trained to carry out the work, from providing advice, repairs or managing the collection of fees to generating prepaid codes for unlocking systems and sale of electrical appliances. It is there that families buy an amount of energy in advance to consume without a set period.

“When it is about to end, the user receives a text message, sent by the prepaid software linked to the meter in his house, with the corresponding warning.Olivares adds.

The Pastaza River, which runs through the northwest of the Peruvian Amazon, is rich in aquaculture resources, which are used by native communities in the province of Datem del Marañón (Loreto), who fish for food and income.

In order for the species caught to last at least a month, most communities use salt to keep them in good condition. It is useful for local consumption, but not for sale, which requires other quality standards.

It is within this framework that the project ‘Building resilience in the wetlands of Datem del Marañón’ began in 2019, promoted by profanity, the most important private environmental fund in Peru, with the objective of modifying this commercialization model through the use of more efficient mechanisms based on clean technology. This project is critical to poverty reduction.

“It is a community fishing venture that aims to combine the traditional knowledge of indigenous peoples with clean technologies to develop quality products and commercial value.”, says Patricia Balbuena, former Minister of Culture and former Deputy Minister of Social Benefit at the Ministry of Development and Social Inclusion and responsible for the project.

During 2021, Profonanpe provided 240 solar panels and built two solar-powered ice plants in the Kandozi indigenous communities of San Fernando and Musa Karusha. Together they produce 1,000 kg of ice. The plants – built at an estimated cost of $400,000 each – treat river water for purification and industrial use, filter and store it before processing, and the treated water is then compressed into molds that are frozen to produce blocks of solid ice. . The plants run 14 hours a day and can produce 30 kW of power, of which 10 kW have been used so far.

Currently, fishermen from these communities harvest tons of fresh fish at a lower cost and in a sustainable way.

For now, private and international cooperation is driving the development of sustainable projects in the Peruvian Amazon, with a notable lack of government help, said Pedro Gamio, a former vice minister of energy. He highlighted that private companies have been willing to invest in clean energy on a larger scale, but he lamented the lack of political will of the Peruvian State.

“We have been talking about renewable energies for a long time, but we have not advanced like neighboring countries”, Gamio said. “There are also many bureaucratic barriers and, by the way, a lobby that comes from fossil business interests.“.