Portugal is among the list of countries that will receive Realme’s new cheap Android tablet. nicknamed Realme Pad Minithe product was recently introduced in early April with distribution initially restricted to India and China.

Now, however, the new Android tablet for less than 200 euros will hit the European market. The best of all? This tablet will also arrive in stores in Portugal, according to the latest information. In addition, it will also reach Belgium, Germany, Luxembourg, as well as the Netherlands.

Consumers will be able to purchase the new Android tablet in a total of three memory and connectivity schemes. Note that the cheapest versions will be limited to Wi-Fi connectivity, while the top version, which already costs more than 200 euros, will also have connection to 4G LTE mobile networks.

Specifically, we will have the following versions and prices in Europe:

Furthermore, the new product will be available in two color schemes for its metallic casing, in Gray and Blue, respectively.

Unveiled in early April 2022, the Realme Pad Mini tablet is essentially a cheaper version of the current Realme Pad: Available from €179.00 on Amazon.ES.

The highlight is the 8.7-inch screen, IPS LCD technology with HD + resolution of 1340 x 800 pixels, which is still relatively compact. On the other hand, the top and bottom margins are somewhat noticeable, despite the reduced sides.

The main technical characteristics of the Realme Pad Mini tablet 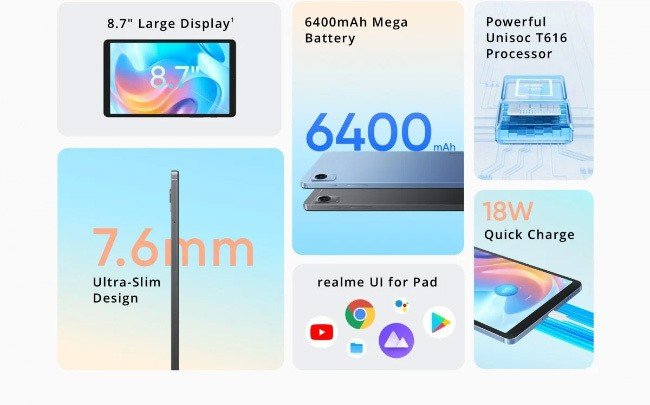 The “heart” of this Android tablet is the UNISOC T616 chipset, a SoC eight cores with Mali-G57 MP1 GPU graphics. That is, a simple processor, but relatively cheap and simple, but competent in service.

This tablet can also be equipped with 3 GB or 4 GB of RAM, with 32 GB or 64 GB of internal storage. We also have dual speakers stereowith audio port Jack 3.5 mm, MicroSD memory card and USB Type-C port.

Realme Pad Mini comes equipped with an 8 MP main camera capable of recording Full-HD 1080p video. In addition, we have a 5 MP front camera, as well as a 6,400 mAh capacity battery and 18 W fast charge.

In summary, this is a very simple tablet, but for the price it can be a good option. It will be useful for reading documents, working, making video calls, as well as for entertainment and playing some current titles.

Netflix has a new strategy to acquire and keep subscribers

Realme Narzo 50 5G is the next cheap and good Android smartphone!