Realme today held a special event for Europe, in which it presented the new Realme 9 and 9 5G terminals in this specific market.

The specifications integrated in the models are interesting, but the X factor that can conquer many users is the price below 280 euros of the new terminals.

In a specific event for the European market held today, Realme has just launched the Realme 9 and 9 5G models on the old continent, which come at a very attractive cost of 279 euros and 259 euros, respectively.

The cost is even more attractive if we think that for only 259 euros it is possible to get a smartphone with support for 5G communications. But there are other very interesting arguments.

Let’s start exactly with the Realme 9 5G. The smartphone arrives in Europe with an LCD screen 6.6 inches with resolution of 1080pan update rate of 120Hz and a touch sampling rate of 240 Hz.

At the controls is the processor snapdragon 695 paired with 4GB of RAM and even 128GB internal storage capacity. Better: Realme’s new 5G model brings with it support for expanding up to 3GB in dynamic RAM.

In the optical part, the model has a primary sensor of 50 megapixelsplus a macro and a portrait, both with two megapixels of resolution. On the front, there is a sensor for 16 megapixels for selfies and video calls.

comes to run Realme UI 3.0based on Android 12, ready to use and integrates a robust battery of 5000mAh with support for fast charging 18 watts.

Realme 9 is intended for photography with a 108-megapixel sensor 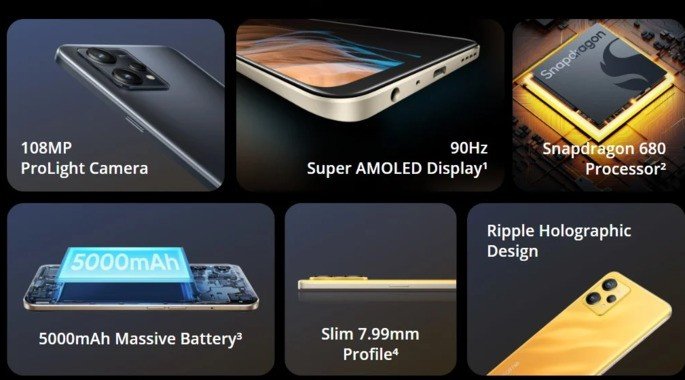 In turn, Realme 9 does not support 5G communications, but it has other arguments, especially for those who like to take photos with their smartphone. Yes, because the highlight goes straight to the triple rear camera setup with the sensor. Samsung ISOCELL HM6 108 megapixels.

The new sensor, which reaches the market for the first time through this terminal, is equipped with NonaPixel Plus technology that offers a 123% increase in light collection capacity. Still in the rear camera module, the Realme 9 has an ultra wide angle sensor of eight megapixels and a macro sensor with two megapixels of resolution

At the heart of the new Realme 9 is the processor snapdragon 680 paired with from to 8GB of RAM and even 128GB internal storage capacity. In turn, the AMOLED screen with 6.5 inches has an update rate of 90Hz.

Also, run Realme UI 3.0under Android 12 and is equipped with a battery of 5000mAh with support for fast charging 18 watts.

Xiaomi: this smartphone has exceeded one million units sold

Google reveals the Top 10 most popular holiday destinations in Portugal