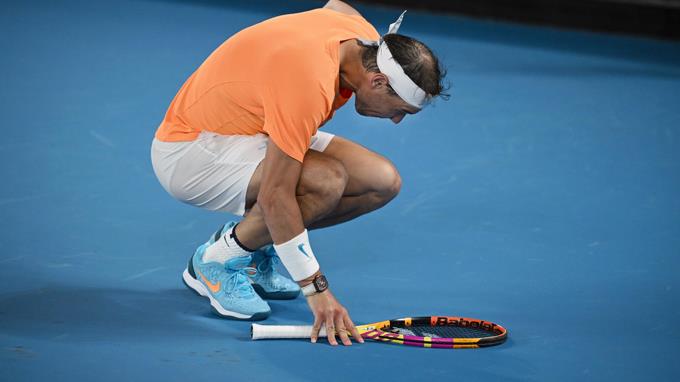 The Spanish Rafael Nadal, current champion of the Australian Open, said goodbye on Wednesday with a defeat and an injury in the first Grand Slam of the year, where the number one in the women’s draw, the Polish Iga Swiatek, continues ahead.

Subscriber to epic feats, such as the comeback a year ago to take the trophy, the 36-year-old Spaniard succumbed this time to the push of the American Mackenzie McDonald, world number 65, and to a new injury, the third consecutive in a Grand Slam .

"I can’t say I’m not mentally broken right now, because I’d be lying."he later said at a press conference where he was seen dejected and with his voice on the verge of breaking.

Constantly pursued by injuries, Nadal assured that he wants to "keep playing tennis" and that he does not want "step back". But "the glass fills up and there comes a time when the water can come out"he added.

It had been seven years, precisely since he lost in Melbourne against his compatriot Fernando Verdasco in 2016, that the winner of 22 Grand Slams had not said goodbye so early to one of the four major tournaments.

"I didn’t want to retire"

The 27-year-old Californian, with only one win against a top 5 in his career, had promised a match "memorable" and complied. He broke his serve in the first game and put up a wall to repel all of Nadal’s attacks.

Desperate with his mistakes and with the chair umpire, whom he asked for more time between serves, Nadal dropped the first set and again found himself trailing 2-0 at the start of the second.

The Spaniard then began to vary his shots and go higher to the net, with which he managed to begin to tame McDonald’s momentum. But in the eighth game he was injured trying to catch a forehand shot from the American.

Nadal stopped with a gesture of pain and put his hand on his left hip: "the pubis"he said looking at his team in the stands.

The injury forced Nadal to retire for a few minutes to the locker room to receive treatment, while the cameras pointed at his wife in the stands, wiping away tears.

Barely able to run or hit a backhand, the Spaniard held on court and fought until the end of the third set.

"I didn’t want to retire being the defending champion here"explained Nadal, whose elimination leaves Serbian Novak Djokovic even more favorite to lift the trophy and equal his record of 22 Grand Slams.

rain disturbances
The rest of the day at Melbourne Park was conditioned by the rain which, for the second consecutive day, forced the outdoor games to be postponed until the afternoon.

But the main matches of the day could be played on the three indoor courts, including that of the world number one, the Polish Iga Swiatek, who beat the combative Colombian Camila Osorio, number 84 in the world (6-2, 6 -3).

Unsure at first, it was not until she was 4-0 on the scoreboard that the Colombian settled on the court and put Swiatek in trouble, who, however, brought out her quality to continue on the path to her fourth Grand Slam.

"It was much harder than the result says. It was very physically intense and Camila (…) didn’t give me many free points"assured the Pole.

The rest of the favorites in the women’s draw also resolved their commitments: the American Jessica Pegula (N. 3) got rid of the Belarusian Aliaksandra Sasnovich in two sets 6-2, 7-6 (7/5) and the Greek Maria Sakkari she survived Russian teenager Diana Shnaider (3-6, 7-5, 6-3).

In the men’s draw, the Argentine Tomás Etcheverry could not beat one of the most talented youngsters on the circuit, the Italian Jannik Sinner, who closed the match in less than two hours (6-3, 6-2, 6-2).

Pope Francis considers that being homosexual is not a crime