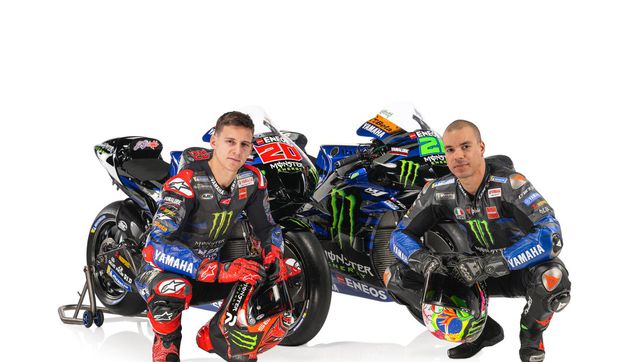 First presentation of a MotoGP team for the 2023 season, the one that will start on March 26 at the Portuguese circuit of Portimao. It has been that of the Monster Energy Yamaha team, that of Fabio Quartararo Y Franco Morbidelli. The Iwata factory once again trusts the Frenchman, with whom he seeks revenge for a 2022 in which they were forced to cede the throne to Francesco Bagnaia and Ducati, possibly the 2021 champion being the fastest driver on the track, but at the handlebars of a Yamaha M1 that was never at his level. As for the Italian, he will seek to regain the confidence and sensations that in 2020 led him to be runner-up and win three GGPP.

The new M1 has more blue in its fairing than the previous version, although what really matters is what it carries inside… Lin Jarvis, head of the team, stands out before they start their mechanics that “There is a new look and new sensations to go into battle”, before recalling the main challenge that the new 2023 season will entail for everyone: “It will be the longest World Championship in history, with 11 GGPP in Europe and 10 in other continents, and with the arrival of sprint races on Saturdays, which It supposes a total of 42 races. That will make it especially difficult for the drivers, but better for the fans.”

When the time came for the drivers to speak, both have had an impact on how different the championship will be with two races per weekend. The champion of two years ago says in this regard that “It’s a great challenge for the drivers. It will be necessary to be consistent, especially in terms of injuries and not miss races. It will be necessary to achieve the best possible result in each of them. This will change the approach of the weekend a lot, because before we only worked for Sunday, but now we will have a race after qualifying”. And Morbidelli, for his part, believes that “this format will be exciting for the fans. As for me, I need to experience a weekend like this to know what they will be like and how to deal with them”.

The intervention of the French and Italian began with the Indonesian presenter asking Fabio if his motorcycle was for two people and if he could ride with him as a package. The devil He smiled and explained that the M1 was not a two-seater, but that he could try to take it with him. From there, she began to talk about the illusions that this new project with Yamaha offers her: “It is always exciting to discover the new colors and find yourself with the new bike. My motivation is to be number one again. We have learned a lot from last year and that should help us move up a position this year (he was runner-up in 2022). Yamaha and the team have worked hard to make that possible.” And to top it all off, the Frenchman once again made his intentions clear when asked what could be expected of him this season: “To fight for the championship again. I believe in my team and in Yamaha and I hope to bring the title back to the factory.”

As for Morbidelli, he is aware that he cannot afford, nor will he be allowed, another season as weak as the last two, although 2021 was conditioned by a serious knee injury: “I will seek my redemption for this year. I learned a lot from last year and we ended up working well. Also, now I have more experience and it’s been more than a year since I tasted champagne on the podium and I’m looking forward to savoring it again”.