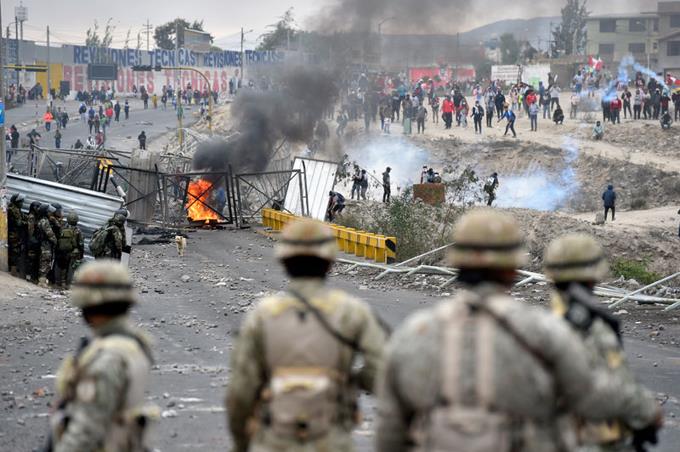 New clashes in the northern and southern regions of Peru occurred this Friday amid new demonstrations in Lima against President Dina Boluarte, who have not given up despite the 45 deaths they have left since they began in December.

The clashes were concentrated in the La Libertad (north), Arequipa and Puno (south) regions, with roadblocks and pitched battles between the protesters, who threw stones with slingshots, and the police, who repelled with tear gas.

In the Puno region, a mob burned down the Zepita district police station and set fire to a customs post in Desaguadero, on the border with Bolivia, local television reported.

In Arequipa, Peru’s second city, dozens of residents tried for the second consecutive day to invade the airport’s runway, closed and guarded by law enforcement since Thursday.

Meanwhile, thousands of protesters paraded through Lima since the afternoon chanting loudly: “Dina murderess!”, “This democracy is not a democracy! Dina the people repudiate you!”.

With a Yunguyo flag (a town on the edge of Lake Titicaca on the border with Bolivia) on her back and dressed in a white straw hat, Olga Mamani, 50, affirms: “We want Dina’s resignation. If she doesn’t resign, the people will not be at peace.”

“The coca leaf gives us strength for this fight that we have started, we want Dina to resign and Congress to be closed (…) we are going to be here until the last consequences,” says Antonio Huamán, a 45-year-old farmer. years with a furrowed face, who arrived from Andahuaylas, the epicenter of the demonstrations in December.

The government declared a state of emergency on Thursday in seven of the 25 regions of the country – including the capital and areas in the north and south of the country – until mid-February, thus enabling military intervention together with the police to control public order. The riots have claimed 45 lives -44 civilians and one police officer- since December 7, after the removal and arrest of the left-wing president of indigenous origin Pedro Castillo, accused of having attempted a coup by wanting to dissolve Congress.

An armed man attacked the Embassy of Azerbaijan in Tehran, a guard was killed