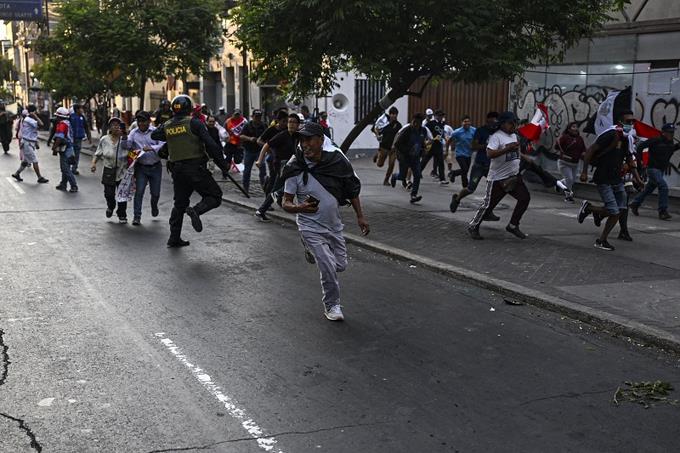 Several leaders of the anti-government demonstrations in Peru affirmed this Wednesday in Lima that in their country there will be no "democracy or peace"if President Dina Boluarte does not resign as head of State.

"There will be no democracy, there will be no peace, if Mrs. Boluarte does not listen to the Peruvian people"emphasized the general secretary of the General Confederation of Workers of Peru (CGTP), Gerónimo López, during a press conference held together with leaders of various regions participating in the protests.

The leader of the largest trade union union in the country added that, even if Boluarte resigns from office, the demonstrations will continue if there is not also a change in the board of directors of Congress, chaired by the conservative José Williams Zapata.

Boluarte does not have vice presidents, so his resignation would imply that the president of Congress assumes the head of state by constitutional succession.

During the press conference, held at the CGTP headquarters, the leaders insisted that the strike called for this Thursday requires the resignation of the ruler, new elections for 2023, the closure of Congress and the calling of a constituent assembly.

"Tomorrow is a national civic-popular strike with peaceful mobilizations"López stated, before ruling out that there is any desire to "acts of vandalism".

Some of the participants remarked that "You can’t talk with this government" and considered a "heroic deed" the trip that citizens from the interior of the country have made to get to Lima, where a day of protests is announced this Thursday.

"Lima still does not react and that is why the regions are here (…) to raise awareness"stated Cristian Cubas, from the northern region of Cajamarca.

Present at the conference were leaders from southern regions such as Cuzco, Tacna, Moquegua and Apurímac, from the northern regions of La Libertad, Lambayeque and Cajamarca, as well as from the Valley of the Apurímac, Ene and Mantaro (Vraem) Rivers, an area in the center and south of the country where the largest coca leaf crops in Peru are found.

Subsequently, López confirmed to EFE that "in order to find social peace in the country (…) it is necessary for Mrs. Dina Boluarte to step aside" and that "a new board of directors is elected" of Congress so that "there is a true government of democratic transition that will lead the elections this 2023".

The CGTP leader maintained that the position of his union and the Assembly of the Peoples, which brings together organizations from the regions, "forever" is that his marches "are peaceful, respecting and without damage or harm to public and private property"for which he demarcated "of any act of vandalism".

Lopez added that "the fight will continue, the fight does not end tomorrow" and reiterated that the "regions do not ask for water, drainage, education, do not ask for more schools"but their platform of political demands is accepted.

The protests, which began last December, have left 41 demonstrators and one police officer dead, while another nine people have lost their lives from various causes caused by roadblocks and demonstrations.