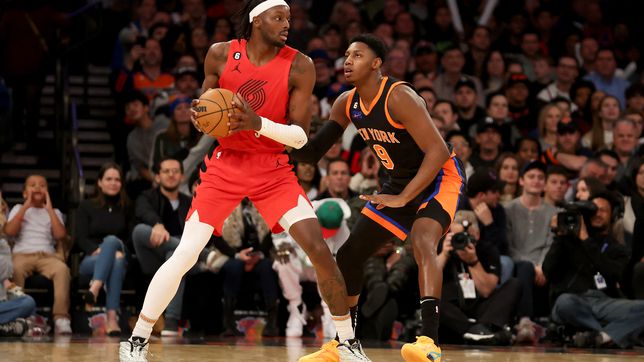 The Portland Trail Blazers caught their breath in Madison after two straight losses, both without Damian Lillard. The Oregon franchise beat the New York Knicks in a game that was decided in overtime… and from the free throw line: the visitors made 38 of 51!, with Jerami Grant as the main executor. The forward reached 44 points thanks to his 21 of 28 from personal, the most shot by a player this season. He was seconded by Anfernee Simons, who shot up to 38 points.

Memphis Grizzlies added 11th victories of the season after overwhelming in a game resolved before the break against New Orleans Pelicans. The locals shot above 60% accuracy until the middle of the second quarter, which allowed them to get a 25-point advantage that was a slab for those from Louisiana. Santi Aldama was absent from the Grizzlies due to the flu and Willy Hernangómez played 12 minutes and had 6 points and 5 rebounds.

Phoenix Suns held the first position in the Western Conference after beating the Detroit Pistons in a game played. The Arizona franchise, without Chris Paul, defeated the Michigan team on the back of a good Deandre Ayton: the center reached his highest score of the season with 28 points to which he added 12 rebounds. Good Devin Booker with 21 points.

Denver Nuggets does not lose the trail of Phoenix Suns, leader of the West. Those from Colorado beat some depleted Clippers who did not have the injuries Kawhi Leonard, Paul George and Luke Kennard. Huge Aaron Gordon with 29 points and a double-double for Nikola Jokic: 19 points and 13 rebounds.

The reaction of the Minnesota Timberwolves stopped in five straight games (10-9 now): 110-108 in Charlotte, in a game that they should have won against a rival without LaMelo Ball, Dennis Smith and a Gordon Hayward who will be low again long-term, now due to a shoulder injury. Depleted, the Hornets (6-14) link two victories for the first time this season. And they do it thanks to a tremendous third quarter: 39-21 against some Wolves that seemed like the ones from the start of the season. Losses, very bad percentages and little attitude, with a defense that was too porous as soon as Jaden McDaniels was charged with fouls.

The lead led to 14 points in the fourth quarter, but the comeback attempt (led by D’Angelo Russell: 20 points, 10 assists) fell short when Wolves failed to finish off the rebound after a Terry Rozier miss and ran out. possession to tie. Rudy Gobert finished with 17 points and 17 rebounds, Anthony Edwards with 25 points and a horrible Karl-Anthony Towns with 19 points and 4 rebounds and a shooting series to forget: 6/22, 1/11 from 3-pointers.

The Hornets held on for victory led by Kelly Oubre (28 points, 6 rebounds) and Rozier (22 and 8 assists). Between the two, 21 points in the decisive third quarter. With that and the work of PJ Washington (who scored the final free kicks) and Theo Maledon’s points from the bench (14) it was enough against some Wolves who shot themselves in the foot, as they have done too many times this season.