They plead for more firmness and have expressed it widely. According to a survey carried out by the CSA Institute for CNEWS, unveiled this Thursday, October 14, more than 9 out of 10 French people think that justice must be more severe in the face of delinquents.

The survey also revealed a greater difference in opinion according to political proximity. If the “yes” comes largely in the lead among supporters of the left (78%) as well as of the right (98%) and the center (98%), the “yes, absolutely”, just obtains the majority among the supporters. left (51%). 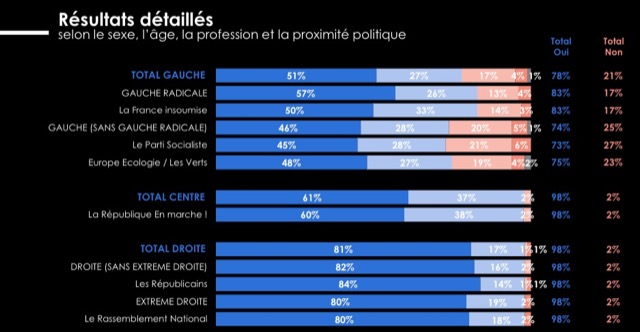 This investigation comes two weeks after the replacement of the ordinance of February 2, 1945, founding text relating to delinquent children, by the code of criminal justice for minors (CJPM), on September 30.

Its delicate rewrite was initiated by the former Minister of Justice Nicole Belloubet by ordinance and ratified in February by Parliament.

Like his predecessor, Minister Éric Dupond-Moretti praised a “historic” and “revolutionary” reform which aims to correct a system that is running out of steam: too long judgment times (eighteen months on average), with the consequence that 45% of cases are decided after the minor has reached the age of 18.

Above all, one of the flagship measures of the justice reform currently underway is aimed precisely at stopping the “unbearable feeling of impunity” of young delinquents, in the words of the current Minister of Justice. To do this, Eric Dupond-Moretti has indeed acted the end of the reminder to the law, much criticized. It will be replaced on January 1, 2023 by the probationary penal warning. While the first easily exempts the respondent from legal proceedings, the second will allow justice to put him under surveillance for a year.

For more “speed” and “efficiency”, the reform also provides for a judgment in two stages, with a first hearing on the guilt within three months maximum and a hearing on the sanction six to nine months later, after a period of “educational testing”.

Still, for some unions, “rapid justice is expeditious justice,” had castigated with the France-Press agency Jacqueline Francisco, the SNPES-FSU of the PJJ (judicial protection of youth). “It is not the repression which makes that the children do not commit delinquency”, had added the specialized educator, estimating that “these teenagers need to find the way of the confidence with the adults”. The unions have also announced the creation of an observatory, intended to “be a lookout” and “make proposals”.

CSA study for CNEWS carried out by self-administered online panel questionnaire 12 to 13 October 2021 with a nationally representative sample of 1,000 people aged 18 and over.

US seeks help to investigate corruption in Central America

The Voice All Stars: New rules for the semi-final live this Saturday

At the Hyères festival, eco-responsible fashion on the front of the podium

Speeding: he buys a Lamborghini 270,000 euros, the police take him 2 hours later and sell it

The Córdoba Open and the concrete possibility of having Juan Martín...

Aryan Khan’s grief after talking to his mother Gauri and father...