This is already one of the main themes of the 2022 presidential campaign. According to a survey carried out by the CSA Institute for CNEWS, unveiled this Thursday, October 7, a little more than 4 in 10 French people would be in favor of zero immigration to France.

In detail, 41% of people questioned say they are in favor of the idea of ​​completely stopping immigration in France, whether legal or illegal, when 59% of respondents say they are against.

Regarding social status, the inactive are those who display the highest membership rate (45% are for zero immigration), ahead of CSP – (43%). It should be noted that only a third of CSP + (33%) is the most privileged category of French people, such as business leaders, the liberal professions or those with higher incomes in the private sector – to use the definition of INSEE – supports this idea. 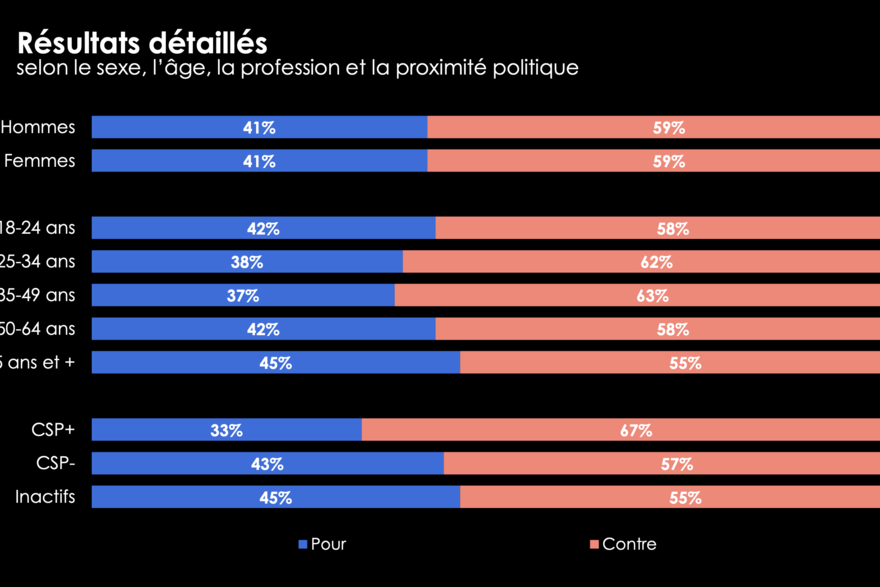 Regarding the political proximity of the respondents, the right-wing voters are generally those who are most in favor of stopping migratory flows (72% of these voters are for zero immigration, 28% against). The disparities, however, remain significant between the voters of the National Rally, more radical, with 92% of those polled who would be for such a measure, compared to the 63% of Republican sympathizers also in favor of this zero immigration.

On the other side of the political spectrum, the left is strongly opposed to the idea of ​​stopping the reception of foreigners. The Greens stand out even more massively by their refusal (93% of green voters are against zero immigration). But the other left parties also reject it en bloc, notably La France Insoumise (88% against), the Socialized Party (81%) and the left (excluding the radical left) at 86%. 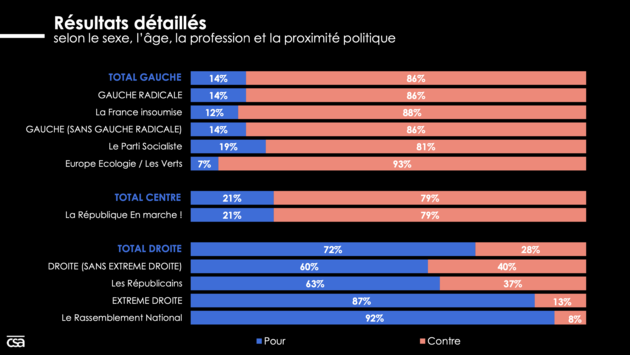 A major subject of the presidential election

The idea of ​​reduced immigration has recently come back to the fore. During a conference in Lille on October 2, Eric Zemmour supported this proposal, taking up a similar idea put forward by Georges Marchais, then secretary general of the Communist Party, in the 1980s. “We must stop illegal and legal immigration; that’s exactly what I’m saying today, ”launched the polemicist, credited with 17% of voting intentions in a last poll, while he is not declared.

Invited this Wednesday, October 6 on CNEWS, in the program Punchline of Laurence Ferrari, the author of “France has not said its last word” has also given the cover in sharply criticism the migration policy of Emmanuel Macron. “We don’t have the same vision. I didn’t wait for this poll to think so. (…) he is the man of happy globalization […] Me, I do not have a closed vision, it is false. I want to stop the migratory flows. Especially coming from a civilization far from our own, he said.

Concerning the other candidates, on the right, Valérie Pécresse presented, this Tuesday, October 5, her constitutional revision project, aimed at “stopping uncontrolled immigration”, if she was elected President of the Republic. For his part, Eric Ciotti, meanwhile, proposed to return to the right of the ground.

A major subject of her policy, Marine Le Pen announced on September 28 the outlines of her referendum to combat immigration. The president of the National Gathering wants to “drastically” reduce immigration by presenting a bill to recast “all the law applicable to foreigners”.

For his part, Arnaud Montebourg, also a candidate for the supreme office, is also testing the terrain of immigration. The former socialist minister wonders in particular about a “more balanced distribution in France of people from the same geographical area”, but also on the establishment of “economic immigration limited to professional sectors under strain”. A proposal certainly less radical than a complete stop of immigration but nevertheless noticed.

Aged 18 years and over, 1,000 people responded to this CSA survey in the form of a self-administered online questionnaire, from October 5 to 6. The latter had to choose between the two proposals to the following question: Are you for or against zero immigration in France, whether legal or illegal?

Beijing judges that Washington is “playing with fire” over Taiwan

About 600 migrants prevented from entering Greece

Italy pays tribute to Judge Falcone, murdered by the mafia 30 years ago