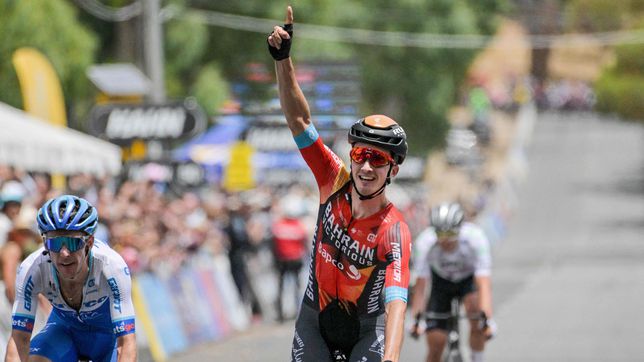 Pello Bilbao has achieved this Friday the first joy for Spanish cycling in the 2023 season. The Bahrain-Victorious cyclist has won the third stage of the Tour Down Under after keeping an eye out for attacks from Simon Yates and Jay Vine on the climb to Corkscrew to sprint past them both. A Pello Bilbao, who with this victory is also fully involved in the fight for a general classification led by Jay Vine with two stages to go.

A breakaway made up of Fabio Felline and Mikkel Honoré was the main protagonist for a large part of the stage, and even more so after both had up to 3:45 with the peloton. However, the work of Jumbo-Visma and Alpecin-Deceuninck in the peloton meant that the difference was decreasing and that Honoré released Felline in the mountain points dispute at Checker Hill, although the Dane was caught by the peloton with 23km to go.

In the final stretch, nerves increased and runners like Corbin Strong or the leader Rohan Dennis were affected in a fall before the decisive ascent to Corkscrew. A climb in which the race was blown up by a hard attack from Jay Vine who was picked off by Simon Yates and joined shortly after by Pello Bilbao after chasing them down after a sensational descent en route to Campbelltown. Between Vine, Yates and Bilbao the victory of the stage was played and in the reduced sprint Pello Bilbao showed off his greatest speed to overcome Simon Yates and achieve the first Spanish victory in this 2023 while Jay Vine managed to snatch the overall leader’s jersey from Rohan Dennis. A leadership that Pello Bilbao also dreams of, since the Spaniard is only 15 seconds behind Vine in the general classification with two stages to go before the end of the Tour Douw Under.

Classification of the third stage of the Tour Down Under

General classification after the third stage of the Tour Down Under