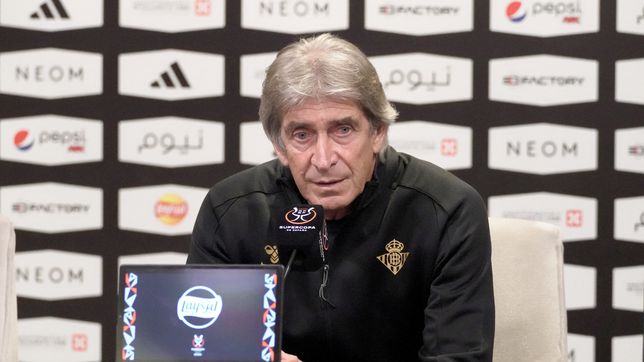 The Betis coach, Manuel Pellegrini, valued the prelude to his team’s clash against Osasuna in the round of 16 of the Copa del Rey. “I see the future as always. We have to use the campus as we did lately. There are casualties, but this team always responded. We look forward to moving this forward.” He did not hesitate to refer to the newcomer Abner: “He is a player who can give us a lot, he has technique, speed and he is young. He must be ready for the needs we have after Álex Moreno left, he will be summoned for tomorrow ”.

Low: “Fekir has a small tear in the calf, we cannot know how many weeks it could be. But he is ruled out for tomorrow’s game. Rui Silva has muscular discomfort, Guardado is suspended, Joaquín has not yet recovered from his soleus injury and Juanmi still has some discomfort from his ankle operation. The rest are available.

Osasuna: “I see him as a very difficult opponent, he is having a great campaign and he will look for a place in the next round. Hopefully we are up to the level of the previous games to be able to overcome them”.

villamarin: “I always prefer to play at home, there is your audience. But if we think that playing at home means that we pass, we are wrong. The key will be to reflect the same spirit of the team”.

extensions: “I think the same because it is a reality. With the intensity and dynamics played today, there are always players with cramps. 87 or 98 minutes are already played. If we put another 30, the risk of injury is greater. For me, it should go straight to penalties.”

Departures: “It is difficult to know if anyone can leave. We already know the economic reality of the club, if an offer arrives that solves problems, it must be done. If it is to take salaries off your back, no ”.

Super Cup: “I don’t make the assumption of having gone to the final, we would have had to play that game to know it. But watching the final, it does leave me very satisfied with the feelings of our match. I think that in the second half we were superior to Barcelona”.

competitiveness: “We are a team that tries to play each match with the maximum intensity. We want to be a strong team from the beginning. There is not an A team and a B team, that allows me to rotate. It is essential with this calendar that the whole team feels important”.

VAR in Cádiz-Elche: “I have always been a supporter of VAR because it almost always solves things that do not depend on criteria. I don’t know why it was wrong yesterday. It doesn’t change my opinion.”

Luis Henrique: “Yes, we saw this potential from the beginning. He plays very fast, very powerful. Technically we see that he has important things. He played many games contributing very little to the team, but he had to give him confidence and he is improving. He is very eager to learn and I am very happy for him ”.

Juan Cruz: “He had some setback in his recovery, but we hope that on Monday of next week he can be with us in training.”

Loren Moron: “I have already said it, there is a team that tries to respond in each game. There are three strikers, he understood it and preferred to stay here. Everyone has the chance to act and he did it in the Super Cup”.