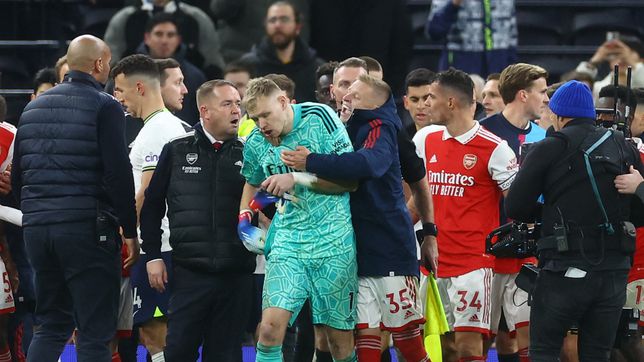 Craig Pawson signaled the end of the match and Aaron Ramsdale, while fixing his gaze on the stands, kissed the Arsenal shield. Mikel Arteta’s team had stormed the Tottenham Hotspur Stadium and the English goalkeeper, who emerged as the hero Gunner during the second half of the match, he dedicated it to the fans spurs that they had been scolding him throughout the match behind the goal. Although, as the visiting goalkeeper stated in the microphones of sky sports after the crash, “the fans of spurs They made comments to me throughout the second part and I returned some jokes to the few who made them, which were probably well received, sportingly ”. Even so, Richarlison reproached him for the gesture and, when Aaron Ramsdale went to collect his things on the side of the goal, a fan kicked him from behind. The mess was mounted.

While the security members separated the Brazilian and the English, a local fan took the opportunity to stand on the billboard and attack the Arsenal goalkeeper. Aaron Ramsdale’s teammates quickly came to his aid. The members of both teams got involved for several minutes at the back of the field of play where the incident had taken place, until Mikel Arteta’s pupils went to celebrate the victory with their own. However, the reactions to what happened did not wait. The FA (Football Association) issued a statement minutes after the end of the match: “We strongly condemn the incident involving a spectator following today’s Premier League match between Tottenham Hotspur and Arsenal. This is totally unacceptable behavior and we will work with the police, relevant authorities and clubs to ensure that appropriate action is taken.”.

Aaron Ramsdale himself was asked about the aggression in the mixed zone. “A fan jumped on me and gave me a little kick in the back. That was what happened”, explained English. The smile that flooded the face of the Arsenal goalkeeper at the final whistle completely dissipated. And it is that what happened at the end of the match was, in the words of the goalkeeper Gunner to sky sports, “a pity. After all, it’s just a football game. Both sets of players tried to push me away. Luckily nothing too serious happened, but it’s a bitter taste, I’m sure we’ll enjoy it when we get back to the locker room”. The Tottenham fan had managed to spoil the party for one of the great protagonists of the North London Derby.

Likewise, the PFA (Professional Footballers’ Association) also hurried to issue a statement in defense of Aaron Ramsdale: “Violence towards players is completely unacceptable. These types of incidents happen all too often.. Players have the right to be safe in their workplace. When a player is attacked, we expect the laws and regulations that are in place to protect them to be properly applied. As a players’ union, we treat this issue as a matter of priority. We will continue to work with the authorities to demand that players and staff are better protected in their workplace.”. In the next few hours, the Premier League could rule on a possible sanction for both Tottenham and the fan who kicked the Arsenal goalkeeper.

“I have not seen anything” and “I have not seen it”, said Mikel Arteta and Antonio Conte respectively in the microphones of sky sports. In the case of the Arsenal coach, he added: “What I have seen is a beautiful football match. Aaron (Ramsdale) made some great saves and I love that because you need that to win here.” The tangana formed by the players of both teams at the end of the match prevented both coaches from knowing exactly what had happened to the English goalkeeper. However, when the Italian coach found out about the attack at the post-match press conference, he did not hesitate to condemn what had happened: “I only saw a lot of confusion and now you are telling me what happened. If that happened, it’s not good. We always have to show respect for the opponent and for the players. I do not like it”.

The words of the Tottenham coach were joined by a statement from the team spurs. In the text published by the North East London cadre on its website, Antonio Conte’s men claim to be “appalled by the behavior of a fan who tried to attack Arsenal goalkeeper Aaron Ramsdale, at the end of today’s game. Violence in any of its forms has no place in football.” For its part, the club says it has “reviewed the images from the security cameras to identify the fan and will work with the Metropolitan Police, Arsenal and Aaron Ramsdale to take the strongest possible measures, including an immediate ban on access to the Tottenham Hotspur stadium.”.

The Fed raises 0.25% to its interest rate