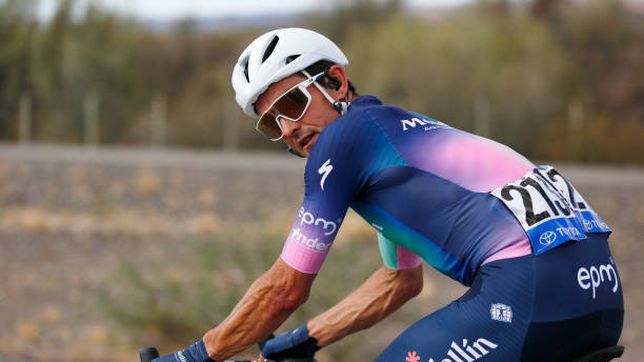 If we look at the newspaper library, we find several examples of longevity in cycling. the dutch Fred Rompelberg He was the last rider to start a season on the World Tour (1995) at the age of 51, the same age at which Davide Rebellin he hung up his bike last year, a few months before he was hit by a truck and killed. Who aspires to compete at that age is none other than Óscar Sevilla, who at 46 springs he continues to radiate the “happiness of a child with Christmas presents” when he gets on a bicycle.

“I am aware that I have less left than more. I am enjoying it and perhaps it is being my best years of cycling. I have not lost the illusion. I pass on my experiences to young people. I wake up every day eager to train. Although my body is losing performance, I feel competitive. In Team Medellín I have found a great team and I feel fulfilled”, The man from Ossa de Montiel explained to AS in San Juan about a possible withdrawal that he has not yet contemplated, but for which he already has a new life as team manager: “I would like to, it is my world. My idea is to remain linked to sport, to cycling, a sport to which I owe a lot. I don’t think about the future yet. I don’t know if this will be my last Vuelta a San Juan because I go day by day”.

Now shares ranks in Medellín with Miguel Ángel López, a rider who, as Sevilla confesses, has given a new media and sporting dimension to the Colombian squad: “The signing of Miguel Ángel is very good for us. It is surprising that a rider who for me is top-10 in the world comes here, who has won Pogacar in the Tour de France, in the Giro… We don’t know how long he’ll be here, but I think we’re going to make the most of it. They know what modern cycling is like and because of the quality they have we have become a very powerful team. If these years ago I was on the podium here in San Juan, I think we can win with him. He has legs to measure himself with Bernal, Higuita, Martínez or Evenepoel. We have welcomed him with open arms.”

In addition, the man from La Mancha, once linked to ‘Operation Puerto’ but never sanctioned, analyzed Superman’s current situation due to his alleged involvement in the ‘Maynar Case’: “I hope Miguel Ángel’s situation is different from mine, that have a better treatment and understanding, that can clarify things for better or for worse, that everything does not remain in a limbo as it happened with me. I had no opportunity to defend myself because there was never a formal accusation, nor from a Federation, judge or UCI. I don’t know beyond, I haven’t talked to him about it. As a cycling lover and Miguel’s friend, I hope he has a lot to do on the World Tour. Hopefully everything will be fixed and that we will see him compete in the big races”.

In that sea of ​​complications that Colombian cycling is going through, Seville, which He has lived in Colombia for 14 years and has dual nationality, He talked about how his friend Bernal’s life has changed as a result of the accident: “Egan surprises me a lot. He is a true champion, because what he has overcome is worth more than any race. He has an overcoming mind that few have. I see you happy. The accident, within the bad, helped him to analyze everything he is experiencing. Sometimes these guys are very young and everything comes to them very suddenly: fame, ego… And that is not easy to bear. Although he may have one more year of recovery to go, I see him to compete in races and in 2023 he will give us joy. He is a great friend, a great person and he has taught me a lot. He is an example ”.

Lastly, Óscar did not want to forget his origins, a Spanish cycling team that promises a bright future. “A good soft drink is coming with Ayuso and Carlos Rodríguez. We are all very excited to see them there, but let’s not put too much pressure on them by comparing them to Contador, Valverde or Indurain. They are themselves and I hope they progress”, explained the Team Medellín player, in addition to highlighting the figure of Mas: “We also have a Enric More than, at times, has been underestimated, From my point of view. We want him to win and be aggressive, but cycling is difficult and very hard, both physically and psychologically. I have high hopes for them.” The incombustible Sevilla, on its way to turning 50, will follow them from a distance.