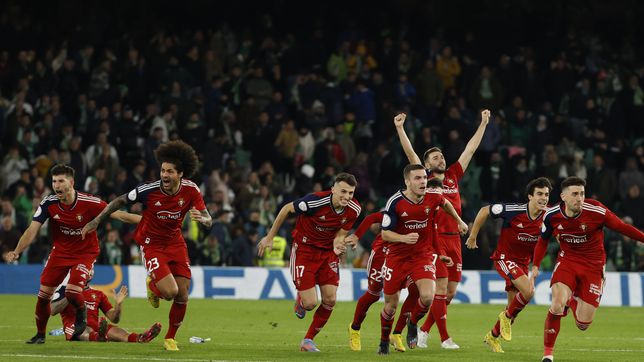 Another fateful penalty shootout knocked down the Cup champion and lifted Osasuna to the sky in these Cup round of 16. Herrera was a hero in a crazy closing after 120 minutes that left honor and many touches of football. Insufficient for Betis, whose crown falls in these eighths of the Cup. The Osasuna goalkeeper saved a penalty from Canales before Guido missed his. All this after a monumental deployment of forces by William Carvalho that was insufficient given the power of reaction of Aimar Oroz and the insistence of Barja. Up to two times the clash was equalized by an Osasuna that dreams of almost everything after leaving the current champion out of the tournament.

Betis began intensely to try to find spaces between the Osasuna wall. Luiz Henrique pinched behind Juan Cruz’s back and Rodri wanted to damage Moncayola’s improvised role on the side. But the verdiblanco impetus, also led by the mobility of Canales, soon found a very real brake in his rival. The Arrasate team held the ball and he closed each space with precision so that Aimar Oroz could approach Torró and impose his law between the lines. It was difficult for Betis to connect with Willian José and Osasuna felt comfortable in that battle of touches that barely threatened damage. Abde began to challenge Sabaly while the Betic team lost the ball faster than expected. There was intensity in both. But perhaps the football that the locals expected and the visitors yearned for was missing.

Pellegrini did not like the plan. It didn’t look like his. Osasuna kept their intensity high and with this they fought for possession and even pressed closer to the rival area. No one stopped threatening clearly, but Betis’s transitions only achieved a certain reliability when they were executed on the counter. A Willian José free kick saved by Herrera put an end to a first half of total balance. Without hints of sticking. With more fears than dares.

Villamarín asked his team for more at the restart, but it was Osasuna who stepped on the accelerator, with Torró turned into an SUV and kike garcia hunting shots in the area. Canales, meanwhile, was holding an individual battle that perhaps lacked the strength to advance. The rojillo team shone in that stretch of duel: Abde moved more, Darko conquered spaces and Rubén García was undetectable. Pellegrini pulled Ruibal and Borja Iglesias to try to revolutionize a scene that was not to his liking. And from both the turn of the crash was born. The youth player launched a devilish cross towards the striker, but it was in the rejection that the magic appeared: William Carvalho first tried to team up with Luiz Henrique and then take advantage of the umpteenth rebound to launch an unstoppable missile at Herrera’s goal. He made Heliopolis crazy.

Arrasate attended the exchange bid introducing Barja, Chimy and Budimir. And it didn’t take long for that trident to damage Betis with its verticality. Guido held what he could and Borja had the sentence on his feet in an impeccable shot that found a response from Herrera of the same level. Osasuna went with everything. Barja found light on the left flank and Chimy took advantage of Loren’s mistake so that Aimar Oroz served a golden service to David García, who jumped more than Sabaly to send the duel to extra time.

In this reboot of history, Chimy had the first of the overtime, but crossed too much against Bravo. Barja was still a storm, but the exchange of blows could deliver glory to either contender. In another appearance by Barja, Rubén García found a forced shot, but it was Carvalho who once again led the destabilization. The Portuguese took advantage of a recovery by Ruibal to deliver Borja Iglesias into space, who gave Sabaly 1-2 before halfway through extra time.

There was time for more in the madness. Osasuna took advantage of a lack of understanding between Sabaly and Edgar to impose a draw with a good shot from Rubén García. There were hardly any forces on the scene. Borja Iglesias and Ruibal tried with more intensity than certainty. He tried until the end Barja. But the penalties defined. And there reigned Sergio Herrera to knock down the champion.