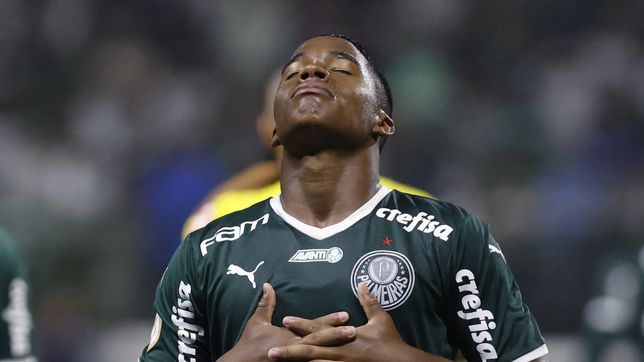 At 16 years old, Endrick, a Palmeiras forward who has a contract until 2025 and a clause of 60 million euros, has become the main object of desire for the big clubs in Europe. The interest of Real Madrid and Barcelona, ​​who are already anticipating a new war for a Brazilian, is more than notorious. The young footballer’s own father was the one who announced that Endric will visit Valdebebas at the end of the year to get to know the facilities and also the people who direct football in the white entity. On the other hand, Xavi Hernández, in statements to ESPN Brasil made in the last hours, also uncovered the movements that Barcelona has made to date.

“We have been speaking with his father and also directly with the player. I explained the project we have in Barcelona. We want talent and he is a talent, capable of making a difference. He has the goal, he has the dribbling, he has a brutal ability to make a difference. He is a player of the present, who is already playing in the Brazilian league, and also of the future”, Xavi said. In fact, Madrid and Barcelona fought vehemently for another Brazilian, Neymarbut more recently also by Haaland, Following the Endrick tactic, he visited not only the workplaces of both Spanish entities, but also that of the main teams in Europe.

Douglas, the father of the young star, declared a few days ago that, to date, the only team that has made a formal offer for the player has been PSG. He did not speak of figures, but later it was revealed in the Brazilian media that the Qatari entity put 80 million euros on the table (although the clause is 60), of which 50 are fixed and 30 are variable for objectives. FIFA legislation prohibits any player from being transferred outside his country until he reaches 18 years of age, a circumstance that with Endrick will occur in July 2024. Before, yes, any club can leave the operation closed so that it is consumed with Endrick’s coming of age, as happened with Madrid and Vincius, Rodrygo or Reinier.

Palmeiras rushed to sign Endrick’s first professional contract on the day he turned 16 (on July 21) and Brazilian regulations allowed it. From that moment Endrick was able to play with the Palmeiras first team. Until the conclusion of the Brazilian championship, which resumes in mid-January, he scored three goals in seven games played. On January 2 he is summoned to start the regular season. In 2022 he also added 16 goals in 17 games between appearances for the under-17 and under-20 teams. Likewise, he was champion of the Montaigu Tournament, in France, with the Brazilian under-17 team.

Although Endrick will not be able to leave Palmeiras until the summer of 2024, events are rushing around him. In addition to Real Madrid, Barcelona and PSG, Chelsea is the other big player that has already made a move. If he continues his meteoric evolution, Endrick fits the bill perfectly. timing planning of the staff that Real Madrid projects. The normal thing is that Benzema is renewed for one more season. And already in 2024 that he seriously consider looking for an alternative for the French, current Ballon d’Or. In any case, Endrick will not be the only card that the entity chaired by Florentino Pérez will play, who has an eye on the clause in Haaland’s contract, which allows him to leave that same year, in 2024, for 150 million euros, according to AS.

It is the president of Palmeiras, Leila Pereira, the most powerful woman in Brazilian soccer, who will directly lead the negotiations for Endrick’s departure. Leila Pereira is close to Bolsonaro and president of Cefrisa, a financier that has become a bank and which, in addition to being the main sponsor of Palmeiras, is also its main creditor, since it recently lent him 1,000 million reais. with which the Sao Paulo club became competitive again and won two Copa Libertadores (2020 and 2021). Without a doubt, Endrick will be one of the most profitable operations for Palmeiras in recent times and the bid for him, in which Madrid and Barcelona are, is already underway.