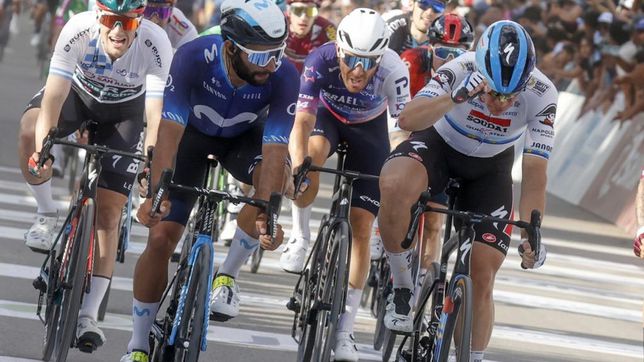 Fernando Gaviria cleared away the doubts of the most skeptical with his arrival at Movistar: It is there to compete with the best. In the second stage of the Vuelta a San Juan, only Fabio Jakobsen, who is probably the best sprinter in the world today, he was able to beat him on the fly by just a few centimeters, with a surprising Jon Aberasturi in third place. Only two days of competition has the Dutchman needed to premiere his record in 2023, while Sam Bennett, Despite not bonusing when finishing fourth, he continues to lead by rank.

The ascension of the National Route 150 It was the only difficulty of the second stage (201 km) that threatened the possibility of envisioning a new outcome to the sprint. However, the fact that his peak was crowned more than 100 km from the finish line did not help to trust the success of a distant attack. Nor in a escape, with twelve runners, in which Óscar Sevilla slipped on behalf of Spain. Despite having rents of more than 3 minutes, Quick-Step and Bora-Hansgrohe got to work at the head of the pack to reduce the gap quickly. The fly knocked on their doors…

Beyond some isolated fall, the greatest enemy of the runners was once again the suffocating heat, over desert landscapes with mountains as a backdrop. With 60 km to go, the break broke, always governed by a willful Óscar Sevilla, which left the head of the race in about five, with Tomas Contte, Leandro Messineo, Gerardo Tivani and José Luis Rodríguez accompanying the Spanish The man from Ossa de Montiel gained two seconds in the last intermediate sprint of the day, which made him dream of taking the lead against an excessively relaxed peloton. The neutralization was rushed to the maximum, so it did not arrive until the 10 km goal banner was reached.

Without any bad signaling preventing it, this time, the train from Quick-Step put Jakobsen’s shot on a layup, but a fantastic Gaviria, who positioned himself perfectly taking advantage of the Bennett wheel, He argued the victory to the very finish line. Great news for Movistar and the Colombian. The union looks good.

Results and general of the Vuelta a San Juan: 2nd stage

The dream ending in Benidorm