On May 17, OnePlus will introduce its flagship Ace Racing Edition which has been the subject of a lot of buzz on the web lately.

Now one of those responsible for the Chinese brand has officially confirmed one of the specifications of the smartphone. The Ace Racing Edition will arrive equipped with a 120 Hz LCD screen. 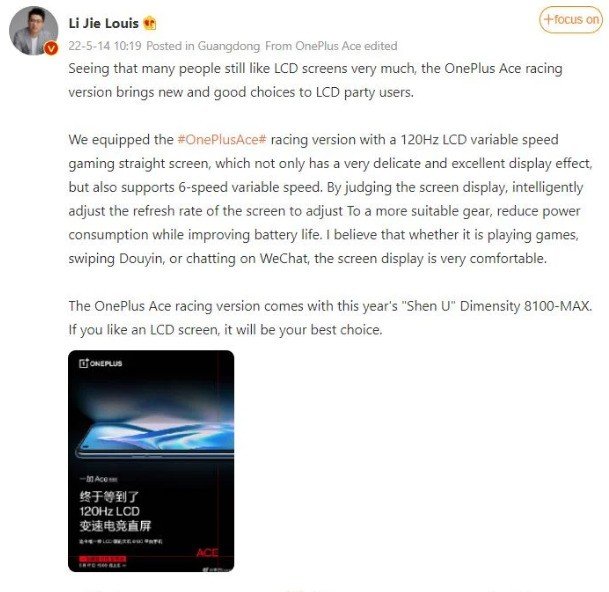 OnePlus has already reserved the date of May 17 to present its next premium smartphone, Ace Racing Edition. And as the terminal has been the subject of many rumors and comments on the Web, today the CEO of the brand for the Chinese market, Louis Li, confirmed one of the specifications of it.

It was on the Chinese social network Weibo that the top manager announced that the new device will come with an LCD screen with a refresh rate of 120 Hz.

From the image that Louis Li shares on that social network, it is noted that the Ace Racing Edition will not have a conventional LCD screen, but a 120 Hz LTPS IPS panel. This means that the smartphone supports variable refresh rates of up to six frequencies. different.

The OnePlus official goes further and clarifies that with variable refresh rates, Ace Racing Edition can provide better battery life. All because when the smartphone displays a still image, it updates more slowly; but when the user is playing games or browsing social networks, the device automatically switches to a faster update. This variation allows saving in energy consumption.

As for the rest of the specifications, the terminal is expected to have a 6.59-inch screen with Full HD + resolution.

As for the optics, it will have a triple rear camera setup with a 64-megapixel primary sensor, an 8-megapixel ultra-wide-angle sensor, and a third 2-megapixel resolution sensor. On the front, there will be a 16-megapixel camera.