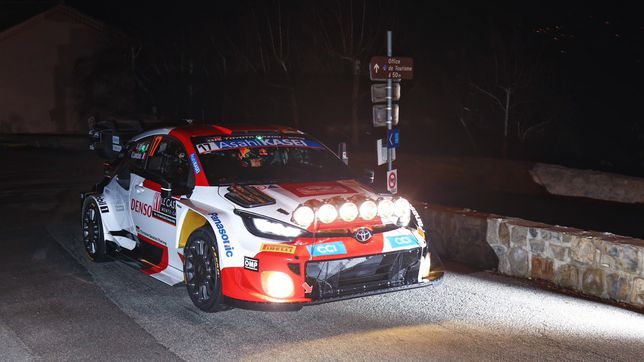 He has established himself as the king of Turini’s night. Sebastien Ogier started the Monte Carlo Rally strong, dominating the two night stages that opened the event, one of them the one that crosses the mythical peak. The Frenchman, eight times winner in the Monegasque event, wants to add another victory to his already bulging record and controls the standings ahead of Elfyn Evans and Ott Tanak. Dani Sordo has had a discreet start, but remains sixth.

From the first meter Ogier has fully stepped on the accelerator and has begun to break away from his rivals. Only Evans has been able to follow in his wake, and for this reason he has finished this first stage in second position. Third is Tanak despite having problems with the electrical system and gearbox, with Thierry Neuville glued to his back after having suffered a slight off-road. Kalle Rovanpera closes the list of the top five, harmed by opening track and finding the first the traps of the dry but with some icy curve roads of the Maritime Alps.

Deaf has started cautiously, perhaps too cautiously, since he has given up more than half a minute with Ogier in just two stages. But there is still a long rally ahead and he has room to recover. The one who has done a brilliant first stage has been Pepe López, since he has placed third in WRC2.