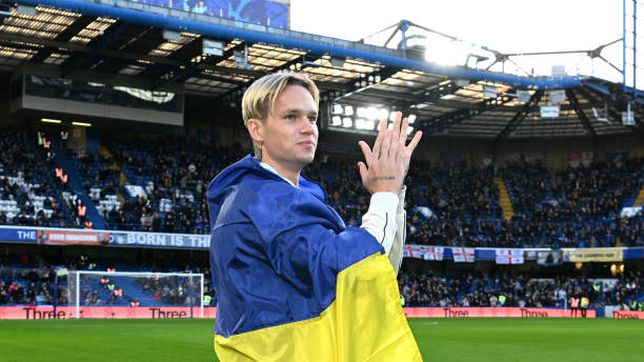 Chelsea’s assault on the Emirates Stadium has been completed. Set Bluewith its president Todd Boehly at the helm, has proposed to burst the winter transfer market based on checkbooks. Days after formalizing the loan of João Félixthe London box has returned to the fray to announce its next addition: Mykhaylo Mudryk is a new Chelsea player. The talented 22-year-old Ukrainian winger, until now a Shakhtar Donetsk player, had all the ballots to play for Mikel Arteta’s Arsenal. Even the Ukrainian player himself had been loved by the fans Gunners on their social networks by posting images of Arsenal matches and praising the game played during this campaign. Finally, the 100 million that will pay the Blues due to their signing they have ended up convincing both Shakhtar Donetsk and the footballer.

Chelsea had been boasting about their new player for days before even making it official. After several winks published on social networks, The London team broadcast a video of plays and goals by the Ukrainian footballer with the Shakhtar Donetsk elastic, with the title “Sharp!”which would redirect fans Blues to the personal account of instagram of the player. Mykhaylo Mudryk underwent the corresponding medical examination hours before Graham Potter’s pupils faced Crystal Palace at Stamford Bridge, for the match corresponding to matchday 20 of the Premier League. The announcement finally came in the middle of the meeting before the eagles. The Ukraine international, who turned 22 earlier this month, has signed an eight-and-a-half-year deal with the Blues to seal his move to Stamford Bridge., collects the statement of his signing. The player watched the match against Patrick Vieira’s men from the stands of his new stadium and was presented to his fans during the break.

As reported in England, the amount is divided into a fixed part of 70 million euros and another 30 million euros in variables. While the English media initially reported that Mykhaylo Mudryk would commit to the capital team until 2027, the link extends until 2030. In the first instance, those of Stamford Bridge informed through a statement that, in case the two clubs reach an agreement, “the Ukrainian international will discuss his personal conditions with the Blues before a permanent transfer”. Soon, she will be under the orders of Graham Potter. So far this season, Mykhaylo Mudryk has scored 10 goals and provided eight assists in 18 games with Shakhtar Donetsk. Some statistics that he will try to replicate at Stamford Bridge to help the Blues to straighten out the sporting situation of the club.

While the victories and results come on the pitch, Todd Boehly keeps trying to harvest them in the offices. Since the present transfer window was opened, Chelsea have signed five footballers, as well as bringing back goalkeeper Gabriel Slonina from his MLS loan spell: Andrey Santos, David Drato Fofana, Benoît Badiashile, João Félix and, now, Mykhaylo Mudryk. In other words, in just two weeks of the winter transfer market, the Stamford Bridge offices have managed, with the variables of the transfer of the young Ukrainian winger, a movement of money that is close to 180 million euros. Chelsea’s extensive list of casualties, extended with the expulsion of the recently incorporated Portuguese footballer and the injury of Denis Zakaria, forced the Blues rush to the market. To the point of “stealing” an almost closed transfer from his London neighbors.

A signing of bells

Even though the market value at which rate olocip to the Ukrainian player (around 12 million euros) is still far from what the Londoners have paid to get his services, the truth is that Mykhaylo Mudryk promises to be one of the great talents of European football. Taking into account the data collected by the AI ​​of olocip so far this season with Shakhtar Donetsk, the new Chelsea player had postulated himself as the best player in the Ukrainian team, beyond goals and assists, in second plays, actions and set pieces, centers, successful passes, driving, finishing or shots. In the offensive aspect, nobody has been better than him at Shakhtar Donetsk. In the same way that he has the second best figures for value generated when compared to the rest of the players in the Ukrainian league.

Mykhailo Mudryk has finalized his move from Shakhtar Donetsk after agreeing personal terms with the Blues. 🤝